Welcome to my weekly fashion blog post. Each week I will discuss female garment, fashion trend or a fashion influence from the age of photograph (1840s through the 20th century). My goal is to educate family researchers and genealogists about the clothing worn by our ancestors. Dating photographs is an issue we all struggle with as family archivists. Additionally, anyone who writes about their family’s history should be aware of the environment in which their ancestors lived. Period clothing was an important part of that environment from how it affected their moments to their daily chores. This week I want to introduce you to Madeleine Vionnet, a French fashion designer from  the beginning of the 20th century.

“A woman’s muscles are the best corset one could imagine.” – Madeleine Vionnet

Since there are plenty of books and sources about Madeleine Vionnet’s life, I will not spend much time reciting a biography of her. What I will discuss is her contribution to women’s fashion. If you have any familiarity with sewing, the terms on grain and bias will be meaningful to you. Simply put, the grain of a fabric is parallel to the woven threads (warp and weft). Bias is 45 degrees of the grain. 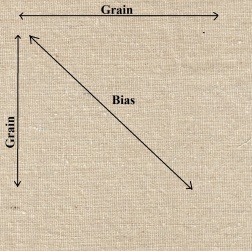 If you pull a piece of fabric along the grain lines, you will notice that the fabric is not very stretchy. But if you pull a piece of fabric along its bias, the fabric has a lot of stretch to it.  And as Vionnet discovered, the bias is highly drapeable. She became famous for her “bias cut” dresses which relied on using the bias of the fabric, instead of the straight grain. Throughout her career, Vionnet draped fabric on a small scale dressmaker’s model to create her masterpieces.

Madeleine Vionnet in her studio about 1920 (Image via Wikipedia)

“She was an artist of fashion as Picasso was to painting.” – Edna Woolman Chase and Ilka Chase from Always in Vogue (1954)

While many of our ancestors could not have afforded to buy an original dress from Madeleine Vionnet’s fashion house, they did purchase or sew clothing influenced by her aesthetic (which was most prominent during the 1920s and 1930s). 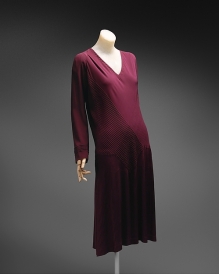 Dresses from the collection of the Metropolitan Museum of Art (New York) from their online database at www.metmueum.org/collection/

Examples From My Collection

My grandmother was a young woman during the 1920s so many of the photographs I have of her show Vionnet’s influence on her fashions, especially in the bias cut of her wedding dress in 1929.