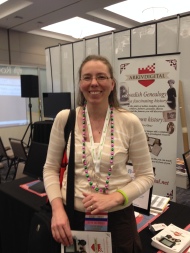 It’s that time of year! I have already seen several posts from fellow genealogists and societies, and even some from family members. Tomorrow is New Year’s Eve and everyone is looking forward to 2016. What new experiences are you anticipating? Many of these posts recommend setting goals (instead of resolutions). My father, a retired career coach, advocates making a few attainable goals and then sharing them with friends and family as a way to keep yourself accountable and on track. It doesn’t help to make impossible goals, a guaranteed set-up for inevitable failure. 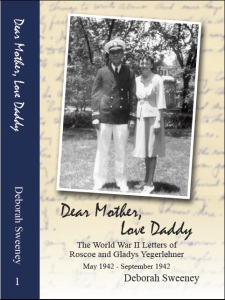 For me, looking back, 2015 has seemed impossibly long and short at the same time. A veritable blur of genealogical activity! I am surprised to recall all the genealogy related events and projects I did accomplish. These are most of the items I can remember….

A few items that I wish I had accomplished (but after looking over the above list of things I did achieve, I don’t feel too badly):

Other odds and ends…. 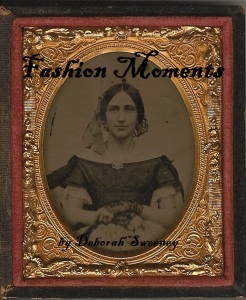 I want to continue writing Fashion Moments’ posts but I am moving away from the weekly format, perhaps to once a month. It has been hard at times to find material that I am interested in writing about. I would love more feedback from readers and suggestions for future posts so feel free to send me questions or photographs.

This year will likely see the end of the WWII letters. Over the next week, Roscoe will begin his journey home to the United States. He continued to serve through the end of the war, but his duties were stateside. One of his postings allowed Gladys and the boys to live with him. The remaining letters will jump ahead months and weeks at a time with the majority being written by Roscoe. Another large block of the letters were written by people other than Roscoe or Gladys, by people who served with Roscoe, like Dr. Edmund T. Lentz. I definitely feel that the letters are moving into a new phase for 2016. 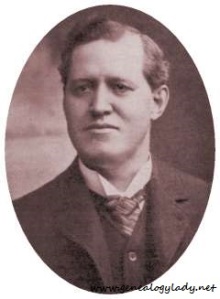 Looking ahead to after the WWII letters (I know it is very hard to believe!), I have an extensive collection of letters that were written between Gladys and David in the 1960s and 1970s. At that time, David was a young adult moving away to college, getting married and relocating to Massachusetts. These letters provide another fascinating glimpse into the world of the Yegerlehners during the mid-twentieth century. In addition, my collection of family memorabilia contains letters from the late 19th century. The Reverend Eugene B. Scofield, a brother to Lena Hackleman, was a traveling minister for the Christian Church in Indiana in the early years of his career. While he was away from home, he wrote many letters to his family.  So even though the WWII letters may be running out, I still have a lot of transcribing and preserving to do.

Have a Happy and Prosperous New Year! And may you find all your elusive ancestors in 2016!

MANY EXPOSURES TO THE DISEASE
OCCURRED AT ELWOOD

Special to the Indianapolis Journal.
ELWOOD, Ind., May 1. – This city is just now experiencing a smallpox scare of considerable proportions, and many people are preparing to leave in the fear that a quarantine will be declared. Persons who are visiting here are hurrying to get out. One of the three cases in a boarding house, and fourteen persons were exposed before the nature of the disease became known. Another is Jacob Groves, a saloon keeper, who was at his place of business until a few hours before he was taken ill.

Many persons have been exposed, and a wholesale vaccination has been ordered.

Special to the Indianapolis Journal.
BRAZIL, Ind., May 1. – Five cases of smallpox were discovered here by the health officer, Dr. Glasgo, this afternoon. The patients are thoroughly broken out, and all the physicians called in consultation agreed on the disease. The infected houses will be quarantined. 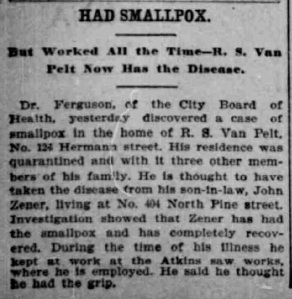 But Worked All the Time – R.S. Van
Pelt Now Has the Disease

Dr. Ferguson, of the City Board of Health, yesterday discovered a case of smallpox in the home of R. S. Van Pelt, No. 124 Hermann street. His residence was quarantined and with it three other members of his family. He is thought to have taken the disease from his son-in-law, John Zener, living at No. 404 North Pine street. Investigation showed that Zener has had the smallpox and has completely recovered. During the time of his illness he kept at work at the Atkins saw works, where he is employed. He said he thought he had the grip.

Special to the Indianapolis Journal.
RUSHVILLE, Ind., April 30. – Two mild cases of smallpox have been under quarantine at Conersville since Friday. The patiens are a Mrs. Sanders and a section hand named Long. The City Council has taken prompt precautionary measures to prevent a spread of the smallpox.

A new case of smallpox was discovered yesterday at 20 West Minnesota street. The sufferer is Hiram Grider, a laborer. His brother was removed to the hospital two weeks ago, afflicted with the same disease.

Another case of smallpox was reported to the Board of Health yesterday, the patient being Louis Thompson, living at No. 1716 Yandes street. He is employed by one of the gas companies, and the Board of Health fears that many people have come in contact with Thompson. He has been sent to the detention hospital and the other five members of the family placed under quarantine. 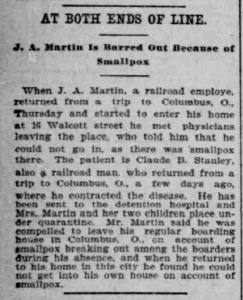 AT BOTH ENDS OF LINE.

J.A. Martin is Barred Out Because of
Smallpox

When J. A. Martin, a railroad employee, returned from a trip to Columbus, O., Thursday and started to enter his home at 16 Walcott street he met physicians leaving the place, who told him that he could not go in, as there was smallpox there. The patient is Claude B. Stanley, also a railroad man, who returned from a trip to Columbus, O., a few days ago, where he contracted the disease. He has been sent to the detention hospital and Mrs. Martin and her two children place under quarantine. Mr. Martin said he was compelled to leave his regular boarding house in Columbus, O., on account of smallpox breaking out among the boarders during his absence, and when he returned to his home in this city he found he could not get into his own home on account of smallpox. 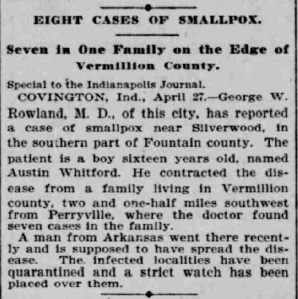 Seven in One Family on the Edge of
Vermillion County.

Special to the Indianapolis Journal.
COVINGTON, Ind., April 27. – George W. Rowland, M. D., of this city, has reported a case of smallpox near Silverwood, in the southern part of Fountain county. The patient is a boy sixteen years old, named Austin Whitford. He contracted the disease from a family living in Vermillion county, two and one-half miles southwest from Perryville, where the doctor found seven cases in the family.

A man from Arkansas went there recently and is supposed to have spread the disease. The infected localities have been quarantined and a strict watch has been placed over them.

Prisoner Had the Smallpox.

Special to the Indianapolis Journal.
SOUTH BEND, Ind., April 26. – George Smith, aged twenty-one years, of Chicago, was locked up by the police last night as a vagabond. This morning the discovery was made that he had smallpox. The station and four officers are in quarantine.