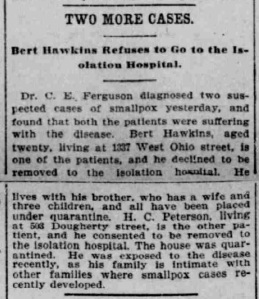 Bert Hawking Refuses to Go to the Is-
olation Hospital.

Dr. C.E. Ferguson diagnosed two suspected cases of smallpox yesterday, and found that both the patients were suffering with the disease. Bert Hawkins, aged twenty, living at 1337 West Ohio street, is one of the patients, and he declined to be removed to the isolation hospital. He lives with his brother, who has a wife and three children, and all have been placed under quarantine. H. C. Peterson, living at 503 Dougherty street, is the other patient, and he consented to be removed to the isolation hospital. The house was quarantined. He was exposed to the disease recently, as his family is intimate with other families where smallpox cases recently developed.