Welcome to my weekly fashion blog post. Each week I will discuss a female garment, fashion trend or influencer from the age of photography (1840s through the 20th century). My goal is to educate family researchers and genealogists about the clothing worn by our ancestors. Dating photographs is an issue we all struggle with as family archivists. Additionally, anyone who writes about their family’s history should be aware of the environment in which their ancestors lived. Period clothing is an important part of that environment from how it affects a person’s movement to their overall lifestyle. This week I introduce you to the infamous pants known as Bloomers.

There are two phases of the bloomer style pant adopted by women in the nineteenth century. The first hit the fashion world in 1851, a few years after the women’s rights convention at Seneca Falls. Dress reform, or the rational dress movement, was another objective in the early days of the women’s rights movement. Amelia Bloomer wrote in her publication The Lily:

The costume of women should be suited to her wants and necessities. It should conduce at once to her health, comfort and usefulness; and, while it should not fail also to conduce her personal adornment, it should make that end of secondary importance.

Amelia Bloomer’s friend, Libby Miller, adopted a style of long pants covered with a short skirt in 1851. Because Amelia promoted the pants in her magazine, the style became known as “Bloomers.” And, of course, they were promptly ridiculed by the leading newspapers. This style lasted through the end of the decade, until the rise of the crinoline made it obsolete (at least for Amelia Bloomer). However, it is important to note that during the Civil War, some nurses wore bloomers for their practicality on the battlefields and in field hospitals. The more ardent dress reformers continued to wear the fashion through the 1860s. 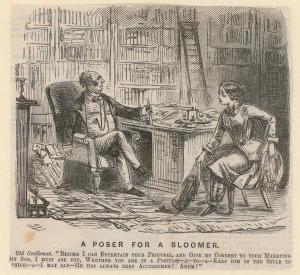 A politial cartoon mocking the bloomers, 1852

The second phase, or rebirth of the bloomers, developed with the invention of the bicycle. Cycling became increasingly popular for both sexes, reaching its peak in the 1890s. However, women’s long skirts were too dangerous to wear while riding. The dress reformers won a huge victory in their quest for rational clothing (although they still received a lot of grumbling from the press). Bloomers became the practical mode of dress for women cyclists, and they were later adapted for other athletic activities. 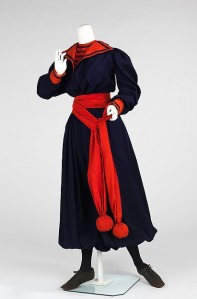 The British Library offers many digital items online, including the Romantics and Victorians collection. A portion of a copy of the Rational Dress Society Gazette is available.

“Women on the Move: Cycling and the Rational Dress Movement” by Aaron Cripps. Posted on his blog, Cycling History, 30 January 2015.

From their website, “Bikes & Bloomers is a research project about the bike, bloomer and female cyclist in late nineteenth century Britain.” This site is fabulous! It contains a wealth of information on the history of nineteenth century women, their clothing and their bicycles. Necessity is definitely the mother of invention.

“Women on Wheels: The Bicycle and the Women’s Movement of the 1890s,” from the Annie Londonderry website by Peter Zheutlin.

Women in Pants: Manly Maidens, Cowgirls, and Other Renegades, by Catherine Smith and Cynthia Grieg. Published by Harry N. Abrams, 2003. Book is currently out of print.

“A Poser for a Bloomer,” Political cartoon circa 1852. John Johnson Collection of Printed Ephemera. Bodleian Libraries, University of Oxford. Image from Wikipedia under a Creative Commons License.

“The Bicycle – the great dress reformer of the nineteenth century.” Samuel D. Ehrhart. Library of Congress Prints and Photographs Collection. Reproduction no.: LC-DIG-ppmsca-29031