Welcome to my weekly fashion blog post. Each week I will discuss a female garment, fashion trend or influencer from the age of photography (1840s through the 20th century). My goal is to educate family researchers and genealogists about the clothing worn by our ancestors. Dating photographs is an issue we all struggle with as family archivists. Additionally, anyone who writes about their family’s history should be aware of the environment in which their ancestors lived. Period clothing is an important part of that environment from how it affects a person’s movement to their overall lifestyle. This week I introduce you to the beret with thanks to reader Jackie Dinnis with her question about some 1930s berets providing this week’s inspiration.

In basic terms, the beret is a round, brimless hat which generally fits around the crown of the head. It is a soft hat without stiffening. Traditional French and Basque berets are made from felted wool, but different fabrics have been used to create a beret like velvet or cotton. The size and shape of this hat has been adapted and refashioned for millennia. According to several websites, the history of the beret is long and its origins are no longer known. Nowadays, most people think of the French when it comes to berets or elite military groups such as the Green Berets.

Some modern berets (Photograph by the author)

During the 1930s, the French beret became iconic with Hollywood movie starts like Greta Garbo and Marlene Dietrich. The beret quickly made its way into popular fashion. While it did not remain in the forefront of fashion, the hat has never completely disappeared in modern times. The style emerged again in the 1950s and 1960s with the beatnik generation. 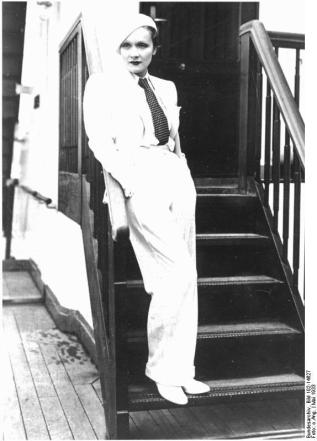 A great history of the beret from Hat Tales.

An overall history of hats with a descriptive list of some different hat styles from hatbox.com

Thinking of buying a traditional-styled French beret? Check out the website of Laulhère-France! They have included a “Some History” tab with a great review of the beret’s influence and history.

Blog Post from Glamour Daze regarding the French Beret in the 1930s.

Marlene Dietrich, 1933. Image from the German Federal Archives via Wikipedia.