Welcome to my weekly fashion blog post. Each week I will discuss a female garment, fashion trend or influencer from the age of photography (1840s through the 20th century). My goal is to educate family researchers and genealogists about the clothing worn by our ancestors. Dating photographs is an issue we all struggle with as family archivists. Additionally, anyone who writes about their family’s history should be aware of the environment in which their ancestors lived. Period clothing is an important part of that environment from how it affects a person’s movement to their overall lifestyle. This week I introduce you to the zipper.

Elias Howe (the inventor of the sewing machine) patented a device in 1851 called a “fastening for garments.” It bears a resemblance to a zipper although there are key differences in the design. Howe did not market his patent and it took another forty years for this early seed to grow. 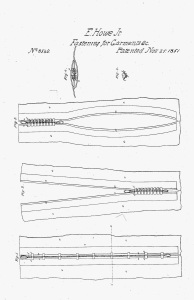 The idea of the modern zipper began in the mind of Whitcomb L. Judson (1846-1909), an inventor from Chicago. The majority of Judson’s work (and fourteen of his patents) were related to street cars. Most of his inventions were impractical. After several unsuccessful attempts to produce and operate his pneumonic street cars, the project was scraped and the cars were converted to electricity. With the failure of his street car venture, Judson turned to “clasp-lockers.” In 1890, Judson invented the device which would eventually evolve into the modern zipper. This early version was used primarily in shoes although it was not wildly successful. It is believed that Judson turned to “clasp-lockers” because he was tired of fastening his high buttoned shoes. Between 1890 and 1893, Judson submitted multiple versions of his “clasp-locker” patent. The final design was approved and it was debuted at the 1893 Chicago’s World’s Fair. Overall, Judson received limited success with his “clasp-locker”. Ultimately, the “clasp-locker” was never used by clothing manufacturers and remained a fixture for boots and shoes. [1]

After the death of Whitcomb L. Judson in 1909, Gideon Sundback continued to improve upon Judson’s 1905 patent. Sundback was the head designer at the Universal Fastener company in Hoboken, New Jersey. After three years of review by the patent board, his design was approved in 1917. This “separable fastener” would later be known as the zipper. The term “zipper” would not be used until eight years later, in 1923, when B. F. Goodrich (the well-known American industrialist) coined the phrase while marketing a new type of rubber galoshes which used Sundback’s “separable fastener.” [2]

In the 1920s, the zipper was used primarily for boots and tobacco pouches, not for clothing. It was not until the 1930s when the zipper made its debut in children’s clothing where it was marketed as a tool for promoting self-reliance thereby allowing children to dress themselves. By the end of the decade, zippers were regularly being used for trouser flies and the plackets of women’s skirts and dresses. [3]

Since the 1930s, zippers have evolved tremendously. They are used everywhere from deep space to undersea exploration and are constructed from various materials including metal and synthetic polymers. They are arguably the most common type of closure in use today.

A great tool for finding patents can be found at http://www.pat2pdf.org/. Ancestry‘s database of patents only contains patents from 1790-1909. This tool allows access to any patent, as long as the patent number is known.

Zipper: An Exploration in Novelty by Robert D. Friedel. Available from Amazon.com or your local library.

The patents of Elias Howe, Jr. and Whitcomb L. Judson can be found in Ancestry.com‘s “U.S. Patents and Trademark Office Patents, 1790-1909” database.

Gideon Sundback’s 1917 patent can be found on Wikipedia, and is the public domain.