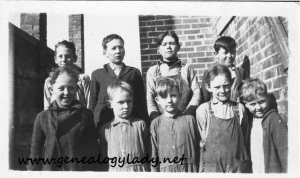 This photograph is not labeled but I presume the subjects to be some of Roscoe’s early students. Roscoe graduated from high school in 1922 and began teaching the next school year in the rural schools of Clay County.  Between terms he attended the Indiana State Normal School in Terre Haute, graduating in 1927. By the mid 1930s, Roscoe stopped teaching and began medical school. The clothing in this photograph does not make it easy to date so I can only narrow it down by the years of Roscoe’s teaching career, circa 1922-1936.

Photograph from the private collection of Deborah Sweeney.

11 thoughts on “Friday’s Faces From the Past – School children”