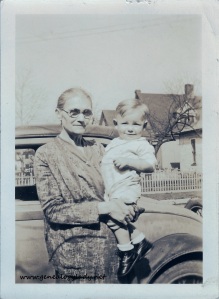 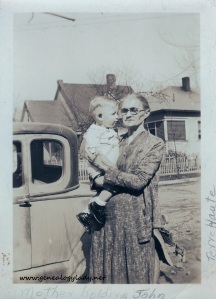 Sometimes we know when photographs are taken. In this case,  my grandmother probably labeled the photographs, as the one of the far right refers to Emma as “Mother.” I do not know the occasion for the photographs, but the photographer (again most likely my grandmother) took several.  We think nothing nowadays of taking picture after to picture to get the correct shot, to make sure everyone is smiling, eyes are open, etc. Not so in the previous centuries. Film cost money, and you didn’t know what you shot until the film was developed.

If the photographs had not been dated, the automobile provides a great clue, especially to all the old car experts out there. Emma’s dress—although we don’t see much of it since John is in the way—does give some clues as well. Gone is the dropped waist of the 1920s. Seated on the car’s sideboard, the top of Emma’s dress blouses over a waist (left). Soft pleats may also be visible at the hip line (right) as well as a longer skirt. These are clothing characteristics of the 1930s. A great place to look for everyday clothing styles of the 20th century are the Sears catalogues, found at Ancestry.

1 thought on “Another Photographic Series”