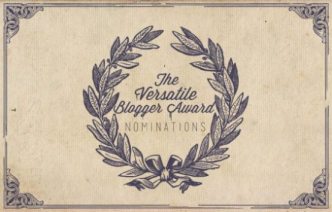 As I am staring at the calendar (which tells me that April is almost gone), it is hard to believe that I have been blogging for almost six months. I am only a few weeks shy of that momentous anniversary. During these months, I have been awarded several blogging awards. This week I was given the honor of the Versatile Blogger Award by Linda Arthur Tejera who writes the blog Living With My Ancestors. Thank you very much Linda!

The rules for this award are similar to several others:

1. Thank the person who nominated you and include a link to their blog. (check…see above)

2. Nominate 15 blogs for the Versatile Blogger Award, link to their page, and leave a comment notifying them of the  newly bestowed honor. (check…see below)

Since I currently follow and read a bunch of blogs, and I have nominated several of them for awards in the last few months, I decided to pick blogs that I have not previously nominated. Many of them are newer or smaller blogs, so check them out. In no particular order…

The last step (3), is to share seven things about yourself…so here it goes.

1. I just submitted my last paper for the BU Genealogical Research Certificate program this week.

2. I signed up as a professional member of APG (Association of Professional Genealogists), also this week. Which means, I will now accept paying clients.

3. My final paper was a client research report. We had to go to a local repository and find a diary or letters that were written prior to 1900. I found an amazing diary written by a 17 year old girl in the 1850s. I really want to do some more research and perhaps write a paper on my findings (to submit to the local historical society/library).

4. Another assignment I had to do this spring was a Genealogical Proof Argument. By using indirect evidence, I had to “prove” a relationship or identity. I used my great…grandmother Ruth Reynolds and I “proved” who her parents were. I am seriously thinking of submitting my argument for publication in a scholarly genealogy journal. I’ll keep everyone posted on this one.

6. I am currently reading George R.R. Martin’s Game of Thrones. I’ve watched both the 1st and 2nd seasons on DVD now, but don’t have HBO. I guess I’ll just have to read the rest of the books while waiting for the 3rd season to come out on DVD, although my husband says that after the first book, the series and the books digress.

7. I really love Glee. I generally don’t watch much television. Given the option, I would probably play on the computer or read a book instead of watching television. I was a theatre major in college and in graduate school and I love musical theatre. I know the show is completely unrealistic but it is fun. This week’s episode featured two songs from musicals that were on Broadway when I was a kid, and I actually saw them! “At the Ballet” from A Chorus Line and “Little Girls” from Annie.

Another blogging award that I was given during the first quarter of this year is the Very Inspiring Blogger Award. I’ve actually received it twice. First, it was by Su Leslie from the blog Shaking the Tree. Then this week I received an email from Lori Crane and her blog a day in the life of patootie. Thank you ladies! I accept your honor and will try to pass it along to some deserving blogs that inspire me. Since this is the second award I am accepting in the last week, I am trying to not nominate anyone I mentioned for the first award. I want to spread the wealth, so to speak. I read hundreds of blogs every week and there are lots of great ones out there. There are also lots of new writers emerging every week too.

To accept the award, one must:

1. Display the award and link back to the person who nominated you.
2. State 7 facts about yourself.
3. Nominate 15 bloggers for the award.
4. Notify the winners.

Alright, 7 facts about myself.

1. I have two children, a girl and a boy.
2. I’m a cat lover and I don’t like dogs (at all!).
3. My first career was in the theatre. I trained to be a costume designer and I spent about 10 years in the field. I have another blog which is sadly being neglected at the moment. www.brokenthreadz.com
4. I am a lifelong book worm. I enjoy reading historical fiction, mysteries, young adult fiction, science fiction & fantasy, dystopian fiction. And yes, I do manage to read almost everyday between work, blogging, raising my family, etc. This is the second year I am participating in the Tewksbury (Mass.) Public Library’s 50 book challenge. Last year I read over 75 books (for pleasure).
5. I am a Doctor Who fan. A lifelong one. The PBS station (WGBH) in Boston starting airing them in the 1970s. I’ve been watching the show since I was in elementary school. I am looking forward to this weekend when the new series starts.
6. My parents were divorced when I was a child because my father came out of the closet. I am hoping that the Supreme Court will make the right decision this week and end yet another level of discrimination against our LGBT brothers and sisters. My father has lived with his husband for over 35 years. They have been married twice, in two different states. The world hasn’t ended and I don’t consider myself to be an abused child because of it, in fact, I consider myself to be pretty fortunate because I have my step-father in my life. He is one of the people who introduced me to the world of theatre as a child.
7. I was born during the Chinese year of the Monkey.

Ok, here’s my list of 15 of the blogs that inspire me. They are not all genealogy blogs, some are sewing blogs.

1. Misfortunes of Knowing
2. The Buff Genealogist
3. Pics of Then
4. Will and Ruth
5. Raising My Rainbow
6. Letters to Rosa
7. One Rhode Island Family
8. Racaire’s Embroidery and Needlework
9. The Irish in America
10. Your Roots Are Showing, Dearie!
11. Historical Sewing
12. The Dreamstress
13. The American Duchess
14. Before the Automobile
15. A Fashionable Frolick

I’m taking a moment to break from the letters because I have some thanking to do. Since January I have been up to my eyeballs in my Boston University coursework, and I have been nominated for several blogging awards over the last three months. I have put these on the back burner until I had more time. Well, guess what, spring break just started for me. So I have already written my blog for tomorrow, and if I might say so, I think it is a good one so make sure you read it!

The first blogging award that I was nominated for was the Wonderful Team Member Readership Award. I was given this honor by ljhlaura who writes the blog Branch and Leaf…a family history blog. Thank you! It really means a lot to me.

There are four easy requirements for this one.
1) Thank the nominator and link back to their site
2) Display the award logo on your blog
3) Nominate readers of your blog that you appreciate and let them know
4) Finish this sentence: ”A great reader ….”

I would like to thank some of my most faithful readers. They read my blog pretty much every day and they let me know it when they hit that “like” button. I must tell you what this means to me. It tells me that what I am doing is worthwhile. I might not have a huge following, but ultimately that does not matter. Having one or two faithful followers (or a dozen) out there who are truly interested in what I am doing is more important than having huge numbers  in my stats. (Ok, that would be great too.)  Thank you, thank you, thank to my faithful readers! You truly brighten my day.

And, of course, my dad (who doesn’t have a blog) but for whom I wouldn’t be doing this blog because he saved the letters from the trash heap decades ago.

And Oh, before I forget…A great reader is someone who takes time every day to read, in spite of ALL the distractions the world creates around us.