Welcome to my weekly fashion blog post. Each week I will discuss a female garment, fashion trend or influencer from the age of photography (1840s through the 20th century). My goal is to educate family researchers and genealogists about the clothing worn by our ancestors. Dating photographs is an issue we all struggle with as family archivists. Additionally, anyone who writes about their family’s history should be aware of the environment in which their ancestors lived. Period clothing is an important part of that environment from how it affects a person’s movement to their overall lifestyle. This week I introduce you to the armistice blouse.

The armistice blouse gets its name from the popular style of shirtwaists worn by women around the time of the World War I armistice in 1918. However, the name was not used until many years later when it was adopted by costumers and historians. A typical armistice blouse was made from a lightweight, semi-transparent fabric, like silk, cotton lawn/voile or handkerchief linen. A defining characteristic of the blouse was its decorative center panel which often featured lace inserts, embroidery or pin tucking. Many had long collars (around the top portion of the neckline) which often extended to the top of the center panel or even further. Generally, they were white or light beige (natural undyed fabric). Some armistice blouses have center front closures with sailor styled collars. 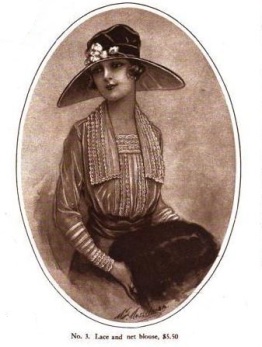 The University of Chapel-Hill, North Carolina currently is participating in a World War I cententary project. Included in the project is an Armistice Blouse exhibit. There are photographs of several examples of armistice blouses in the article.

An example of a center front closing armistice blouse and sailor collar can be found at the Jewish History Museum’s website. This blouse has a wonderful example of pin tucking. The back view shows the sailor collar.

The New York Public Library has an extensive digital collection with many clothing related items, such as clothing advertisements.

A vintage armistice blouse from my personal collection which I bought at an antique mall many moons ago. The center panel on this blouse features a mixture of pin tucks and lace inserts. The sides of the center panel are decorated with embroidered buttons. The blouse is made of silk.

Advertisement for a blouse from the January 1919 issue of the Woman’s Home Companion, p. 26, via Google Books.