CLAY CITY, May 31. – Mrs. Nancy Kline died at Lafayette yesterday at a private sanitarium of brain affection, aged 46 years. Her remains were brought here last night and taken to the home of her mother, Mrs. Elizabeth Schiele. The funeral services were conducted at the home Wednesday morning, and burial at Greenwell cemetery. She leaves six children, Mrs. Ed Fouts and Roy Walker, of Lafayette, and, and four children by the name of Kline.

Nancy has been a recent subject of another blog post (Thriller Thursday – Attempted Murder and Suicide). While she survived the murder attempt when she was 18, she did not live a long life. Nancy was married twice. She outlived her first husband, Theodore Walker. Her second marriage to Stephen Kline appears to have been a rocky one.  They separated after several years of marriage and four children. Nancy moved with her children to Lafayette in the late 1910s. Stephen appears to have fought the separation and began proceedings to convict his wife of insanity. Nancy died very soon thereafter.

Special thanks are in order to Karen Brand for providing me with copies of the court summons and Jane Riley for the pictures of Nancy and her daughter Mae and a copy of Nancy’s obituary. 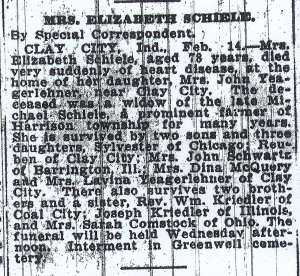 By Special Correspondent
CLAY CITY, Ind., Feb. 14 – Mrs. Elizabeth Schiele, aged 78 years, died very suddenly of heart disease, at the home of her daughter, Mrs. John Yeagerlehner, near Clay City. The deceased was a widow of the late Michael Schiele, a prominent farmer of Harrison township for many years. She is survived by two sons and three daughters, Sylvester of Chicago; Reuben of Clay City; Mrs. John Schwartz of Barrington, Ill.; Mrs. Dina McQuery and Mrs. Lavina Yeagerlehner of Clay City. There also survives two brothers and a sister, Rev. Wm. Kriedler of Coal City; Joseph Kriedler of Illinois, and Mrs. Sarah Comstock of Ohio. The funeral will be held Wednesday afternoon. Interment in Greenwell Cemetery.

Elizabeth was the daughter of Isaac and Anna (Haldeman) Krieble. She was born on 3 April 1844 in Pennsylvania, possibly in Worcester Township, Montgomery County. She was the tenth of thirteen children. Within the next few years, the family moved to Montville in Medina County, Ohio. By 1860, the family moved again, this time settling in Owen County, Indiana. Elizabeth had a relationship with a man named James McCoy, whether as a married couple or not is unknown. Elizabeth gave birth to her daughter Nancy on 16 April 1866. Ten months later, Elizabeth became the second wife of Michael Schiele. Michael and Elizabeth were the parents of eight children: William, Sylvester, Doretta, Susan, Lovina, Nathan, Andrew and Charles. Michael died in 1897, leaving Elizabeth a widow for almost 25 years. They are buried together at Greenwell Cemetery, Harrison Township, Clay County, Indiana.