Now that it has been established that James Laughead was likely the father of Joseph Laughead, the next step is another trip back in time (census-wise) to the 1820 census.

Since Joseph was born in Pennsylvania, circa 1817, and his sisters, Susannah and Ruth, were born in Ohio in 1821 and 1825, searching both states is necessary to establish when the family moved. Five James Laugheads appeared on the 1820 censuses of Ohio and Pennsylvania.

Other clues this census provides: 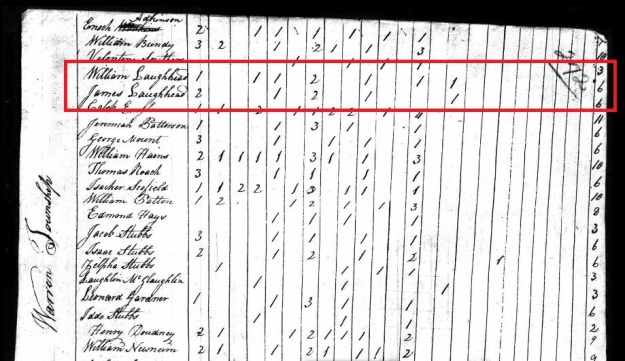 The only other Laughead who lived in Belmont County during this census year was William Laughead. William was enumerated directly above James on the census page. This page was not arranged alphabetically, indicating a physical closeness between those enumerated. William’s household consisted of 12 individuals: one male aged 26-44, one male aged 16-25, one male under 10, one female aged 26-44, two females under 10, and 6 “other free persons.”

It is possible that James and William were brothers, and the 16-25 year old male who lived with William was another brother, Elisha. Both men lived in Warren Township, Belmont County for many years. In 1830, Elisha Laughead first appeared as a head of household in neighboring Guernsey County. Likely this same Elisha was the man who married Nancy Cowen in Guernsey County, Ohio on 10 May 1821.

Elisha was a name that was used often in the family of Joseph Lawhead. He named his first born son Elisha, and the name was used into the next generation. When the search for Joseph’s parents was begun, an assumption was made that perhaps Joseph’s first born son was named after his grandfather “Elisha” Lawhead. However, that does not appear to be the case as James Laughead is now the most likely candidate. Joseph did name his second son James.

James Laughead moved to Ohio from Pennsylvania between the years 1817 and 1820. By 1820, he was the father of at least four children, all under the age of 10, including Joseph (1817). James had at least two brothers, William and Elisha.