Little Eugene Yagerlehner, son of Mr. and Mrs. Frank Yagerlehner, passed away last Saturday at the home of his parents on D street. The little fellow had been ill for some time, and not long ago underwent an operation which failed to prolong his life.

He was 8 years and 7 months of age, the brother of Vera Yagerlehner and the grandson of Mrs. Etta Lake, and the nephew of Mrs. Sabin Kane, Mrs. Charles Vaughan, Mrs. Raymond Proctor and Mrs. Myrta Peterson.

The funeral was held Tuesday from the residence of the parents, with burial in Mount Tamalpais cemetery.

And a few days before the obituary, the family published a notice that Eugene was ill and doing poorly.

Eugene, the young son of Mr. and Mrs. Frank Yeglehner [sic], is reported to be seriously ill at his home. He recently underwent an operation at the San Rafael Sanatarium.

Eugene Yagerlehner was the only son of Frank and Lottie (Lake) Yagerlehner. He was born 11 August 1911, Marin County, California. He died on 6 March 1920 at the family home in San Rafael. Eugene is buried with his father at Mount Tamalpais Cemetery. 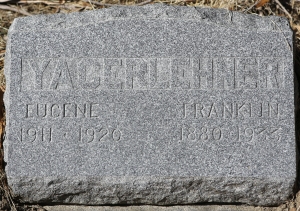 After an illness of more than a year with a heart ailment, Frank Yagerlehner, a resident of San Rafael for 25 years, died Saturday at his home here. He was an employee of the Northwestern Pacific Railroad Company.

Funeral services were held Tuesday afternoon at 2:30 at the parlors of Keaton & Dusel here, with Rev. John J. Canoles, pastor of the Presbyterian Church, officiating.

Yagerlehner was a member of Tamalpais Lodge No. 60, Knights of Pythis, and members of that organization held a brief ceremony Monday evening at Keaton & Dusel’s in memory of their departed brother.

Franklin Yagerlehner was the son of John and Mary (Wright) Yagerlehner. He was born 9 November 1880 in Nine Mile, Allen, Indiana. He was the tenth of thirteen children.

Frank married Lottie Lake on 23 December 1902 in Indiana. Because Frank worked for the railroad, the couple soon moved to California where they settled in Marin county. They had two children: Vera and Eugene. Eugene died young from an unknown condition. He had surgery to correct the condition but it was unsuccessful, and Eugene died soon afterwards in 1920 at age 8 years.

Since Lottie remarried after Frank’s death, she is not buried with Frank but with her second husband, William F. Holbrook. Frank and Eugene are buried together at Mount Tamalpais Cemetery in San Rafael.