In honor of Thanksgiving, I thought it appropriate to highlight the town of Plymouth and Plimouth Plantation. Plymouth was one of the stops on this summer’s whirlwind tour of New England. Since I am a native of the Bay State, I have been to Plymouth once or twice in my life. I remember one cold winter trip during my childhood after my grandmother became an official member of the Alden Kindred, the lineage society of the descendants of John and Priscilla (Mullins) Alden. My grandparents generally only came out to visit over the Christmas holidays so that is why we went during the winter. Since I inherited my grandmother’s Mayflower research twenty years ago, I have expanded her findings. She already knew that we were descended from William Mullins, Myles Standish and Richard Warren as well as John and Priscilla Alden. I have since discovered our descent from William Bradford, William Brewster, Thomas Rogers, James Chilton, Francis Cooke, and Stephen Hopkins. We are also descended from the Winslow family through one of Edward’s brothers who came later. The fact that I am descended from all these Pilgrims is not surprising considering my grandmother’s family arrived in Massachusetts and stayed within a 50 mile radius of Plymouth for over 400 years.

All that remains of the original Plymouth “rock”. It is now off limits to the public. 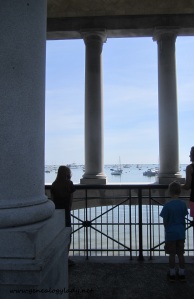 A view from the top of the Rock’s cage, looking out across Plymouth Harbour. 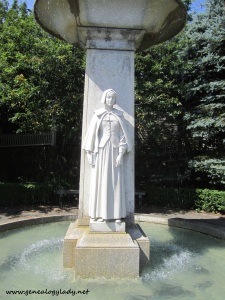 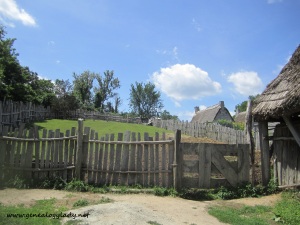 Village view looking up towards the Meeting House 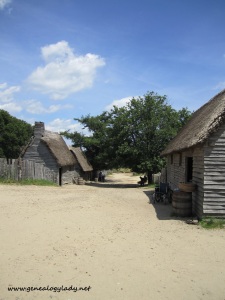 Village view looking down towards the Ocean

View of the ocean from outside the Meeting House 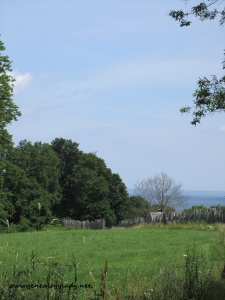 One last view of the Ocean

All photographs were taken by Deborah Sweeney (July 2013).

5 thoughts on “Those Places Thursday – Plymouth and Plimouth Plantation”