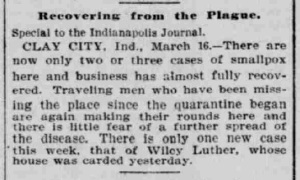 Recovering from the Plague.

Special to the Indianapolis Journal.
CLAY CITY, Ind., March 16. – There are now only two or three cases of smallpox here and business has almost fully recovered. Traveling men who have been missing the place since the quarantine began are again making their rounds here and there is little fear of a further spread of the disease. There is only one new case this week, that of Wiley Luther, whose house was carded yesterday.