Yours of Sept. 21 & 23 came yesterday. Those were the ones with the family pictures. All pictures were good but of course the ones of you and D. were best. And you know I agree with you as to how D. compares with other children and why not? Glen hasn’t changed much as I remember him and Jim hasn’t either. His blue suit does look good – sure wish I had a chance to wear mine. I’ve only wore that suit twice. Once in the Eve, when I got to San Fran., and also in the morn, and each time just long enough to

[page 2] eat a meal. Reports that we get back from our clothes are good. Those who have seen them say they are dry, etc. Looks like mine might dry rot before I get back, but every dog has his day so mine should come.

I suppose you will be sending me a financial statement again one of these days. Remember what I said about bills on your Mother’s illness – String them along so you will always have some money on hand. Pay a little on the hospital bill every month. I don’t think anyone will be too severe.

[page 3] but there isn’t much you can see of me – only what I’m doing. Not the skirt has to be pulled down instead of up. We learned that fast. More The natives are more modest in some ways than the American women. In other ways I would say much less that way especially the brest works. Glamour girls.

A letter came from Boonie yesterday. Seems he is a little money mad in his many enterprises, but maybe it’s just human nature. 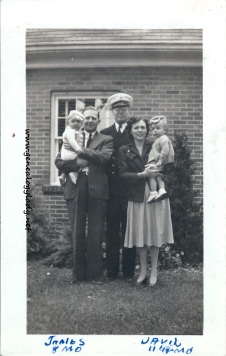