This being Sunday I’ll just slip this in with Sat. letter. The two heavy sheets of paper of yesterday’s letter make almost enough for on letter’s worth but this small bit shouldn’t make any difference.

Since there isn’t anything to write about but the weather will start out by saying it was a little cloudy todo this A.M. and cleared later in the day and was I believe one of the warmest days I’ve seen. Really it was warm enough to go to the seashore but it’s too far to walk hence I didn’t go. We do have a river fairly near but it’s too cold most of the time and there are too many big rocks which makes it too hard on the feet.

Well, my space is short and subject matter is shorter – so solong.
Love Daddy 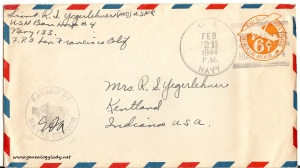 Meanwhile, likely unbeknownst to Roscoe, new orders were being written…..

2 thoughts on “Slip of a Letter (Roscoe)”