[Editor’s note: Dr. Julius Rosenberg served with Roscoe at the Base Hospital #4 in Wellington, New Zealand. Dr. Rosenberg was one of the doctors who stayed behind after Roscoe shipped out. As evidenced in the letter, the Base Hospital closed down in the late spring of 1944. Military activities were drawing away from the far south Pacific, and maintaining a Naval hospital in the region was no longer necessary. During earlier letters written by Roscoe, he refers to Dr. Rosenberg as his friend “Rosey.”

In a very strange historical twist, Dr. Julius Rosenberg shared his name with a rather infamous Julius Rosenberg, who was executed in 1953 with his wife Ethel for espionage. Both men were New Yorkers, were about the same age, attended the same University, the City College of New York, and served during World War II. ] 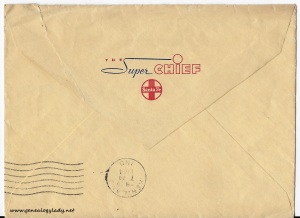 Well, here I am back in the promised land, although it certainly took a long time getting here.

I’ll go back to the beginning, and tell you everything since you left Silverstream. Base 4 officially closed April 1st but we had practically no patients after the first week in Mark. We sat around doing nothing & just about went crazy. Finally the orders started to come & on April 13th, 8 sets of orders to the States came in, including mine, Myers, Criss, Witter, Hynes, Reuckert, Schneider & Drennan. They were the only orders that came in from the time you left. We all went to Auckland & found that we had missed a fast ship by 18 hours. After waiting around for weeks we just missed that boat – The old Navy snafu. Then started another long wait – I waited at the Grand Hotel in Auckland for one month – nearly went nuts – and finally Stan Myers & I were ordered as passengers to a slow

[page 2] Liberty ship out of New Plymouth – so we had to take another train & then started a 25 day sea voyage – at 9 ½ knots – I never thought we’d get here – but we finally landed at San Pedro on June 8th – almost 2 months since our orders arrived. We were in Pedro one week & I got just what I wanted and asked for – the course in Neuro-psychiatry at Philadelphia Naval Hospital – will report there on July 9th . I’m now on my way to Chicago & from there to N.Y. Stan Myers is going to Sampson, N.Y., for duty. Was worried about landing at Pedro – but got a good deal there & had a good time.

Are you still at Great Lakes? – Write me all about yourself. Address is below.

Excuse the writing – I’m writing on a moving train – will mail this before I hit Chicago.