Dear “Junior” – It is about time you wrote, wondered what was wrong, whether you were transferred, or had another son.

No news from anyone except I see John Willard occasionally, and talk to him about some of officer patients. He is still SOQ. He did get orders to Key West, Fla., but the C.O. went to Wash., D.C., and had them cancelled because John is the only Dr. who knows how to go gastroscopies there. Wally Reese, if you remember, our cribbage partner, is still in Phila. Naval, but doesn’t like it, too many superior Regulars. Had a letter from MacClatchie who is in Brazil – C.O. of Dispensary 150 beds. A letter from Bob O’Donnell, too, but he owes me one from way back. Has Cat Fever Ward – about 20 admissions daily, etc. On every 4th night also.

[page 2] Haven’t heard any more from anyone. All are poor writers – but never did expect one from Ralph (Help me) Criss. No news about poor Paul Beard. Heard Buster Hyman was at Portsmouth. One [of] the Marines here was at Bonika.

Had a change of corpsmen – past 4 months, now another [?] picked for X Ray course, 5 mos., he is a chiropractor – big boy 230 lbs and I give him all my colored backaches, pounds hell out of them and they don’t come back. A couple officers – one Hebrew gets it, too. I have a good staff and that makes work more pleasant.

Just finished my ¼ San. Report, and the history of med. activities since war started – Comm. 4 Directive Na Sec Nov. Did you have to do that for your D.M.O.? 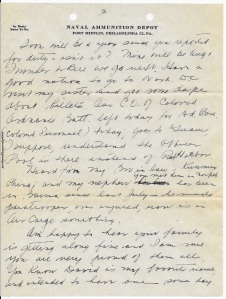 [page 3] Soon will be a year since you reported for duty – isn’t it? Mine will be Aug. 1. I wonder where we go next. Have a good notion to go to Wash., D.C., visit my sister and get some dope about billets. Our C.O. of Colored Ordnance Batt. left today for Ad. Base (Colored Personnel) today, goes to Guam, I suppose, understand the officer pool is there instead of Pearl Harbor.

Heard from my bro-in-law – Kunming, China; and my nephew, you met him in Norfolk, has been in Burma since last July – he made paratrooper, was injured, now is in Air Cargo something.

Am happy to hear your family is getting along fine and I am sure you are very proud of them all. You know David is my favorite name, and intended to have one someday.

[page 4] We had a little bad luck in January, otherwise there would have been one this coming June.

Have been golfing several times, the weather was unusually good. Today it is raining, foggy and miserable, have the heat turned on.

Well, a good man was buried yesterday in spite of the political differences. Comes a time for all of us to be laid away – whether king, middleman or pauper.

Let me hear from you soon, even if a short line.
Regards to Mrs. Y. and family,
Sincerely,
Ed

[Editor’s note: Dr. Julius Rosenberg served with Roscoe at the Base Hospital #4 in Wellington, New Zealand. Dr. Rosenberg was one of the doctors who stayed behind after Roscoe shipped out. As evidenced in the letter, the Base Hospital closed down in the late spring of 1944. Military activities were drawing away from the far south Pacific, and maintaining a Naval hospital in the region was no longer necessary. During earlier letters written by Roscoe, he refers to Dr. Rosenberg as his friend “Rosey.”

In a very strange historical twist, Dr. Julius Rosenberg shared his name with a rather infamous Julius Rosenberg, who was executed in 1953 with his wife Ethel for espionage. Both men were New Yorkers, were about the same age, attended the same University, the City College of New York, and served during World War II. ]

Well, here I am back in the promised land, although it certainly took a long time getting here.

I’ll go back to the beginning, and tell you everything since you left Silverstream. Base 4 officially closed April 1st but we had practically no patients after the first week in Mark. We sat around doing nothing & just about went crazy. Finally the orders started to come & on April 13th, 8 sets of orders to the States came in, including mine, Myers, Criss, Witter, Hynes, Reuckert, Schneider & Drennan. They were the only orders that came in from the time you left. We all went to Auckland & found that we had missed a fast ship by 18 hours. After waiting around for weeks we just missed that boat – The old Navy snafu. Then started another long wait – I waited at the Grand Hotel in Auckland for one month – nearly went nuts – and finally Stan Myers & I were ordered as passengers to a slow

[page 2] Liberty ship out of New Plymouth – so we had to take another train & then started a 25 day sea voyage – at 9 ½ knots – I never thought we’d get here – but we finally landed at San Pedro on June 8th – almost 2 months since our orders arrived. We were in Pedro one week & I got just what I wanted and asked for – the course in Neuro-psychiatry at Philadelphia Naval Hospital – will report there on July 9th . I’m now on my way to Chicago & from there to N.Y. Stan Myers is going to Sampson, N.Y., for duty. Was worried about landing at Pedro – but got a good deal there & had a good time.

Are you still at Great Lakes? – Write me all about yourself. Address is below.

Excuse the writing – I’m writing on a moving train – will mail this before I hit Chicago.