Up shortly after 9:00. Had breakfast, then turned to working at my desk—Bonnie went to Gloucester to get our month’s supply of surplus food. I stayed with Debbie, who watched “Sesame Street”—I worked on composing a letter to the congregation concerning Race Relations Sunday and the upcoming Wesleyan Fellowship meeting. When Bonnie got home I unloaded the car—only one box-full. Her sciatica is bothering her a lot. I drove up to Hannibals—Rip has taken the job of addressing envelopes for me—I took him two batches. I didn’t stay long, was home by 11:30. Shortly after getting home I helped get lunch. Since Bonnie had taken off from work yesterday to go shopping for carpet, she had to work today. I spent the first part of the afternoon re-arranging furniture in Debbie’s room. Her new bed is so wide that it prevented the closet door from opening, so a lot of furniture changing had to be done—which involved attaching the shelves to another spot in the room. Soon after this was finished Debbie went to sleep, and I had the rest of the afternoon to work. I typed a rough draft of the letter to the congregation, but the main part of the afternoon I spent working on Hebrew. I’ve started a review of Weingreen’s Hebrew Grammar. Bonnie got home a little early. I worked on supper while she relaxed. After supper I got right to work on cutting out the pieces for the doll house. This occupied most of the evening, along with some TV. Then turned to Hebrew. Bathed while watching some of Johnny Carson. More Hebrew. OBLO  c. 12:30.

Up shortly after 9:00—gotten out of bed by the phone. After eating I set to work on the letter to the congregation. I had the rough draft written; I typed the stencil, ran them off. Then I was occupied with folding, stuffing. This was interrupted by lunch. As soon as I was done eating I returned to this—Bonnie had to leave for her doctor’s appointment at 1:15—about 1:00 I was finally finished and made a quick trip to the Post Office. When I got back Bonnie left. I then shaved, did some desk work, had a long conversation with Carol Lewis. They’re going to New Haven for about 10 days—next Tues. leaving—so they won’t be leaving Chris with us Sat/Sun as they had planned (they had planned on going skiing). Studied Hebrew until Bonnie got home, then I prepared to make a call. I went to visit Mr. O’Reilley—but he wasn’t home. I returned, worked on Hebrew for a while, but then succumbed to the desire to nap—I did for a short while before supper. After supper I read through the newspaper—the[n] started working again on the doll house. We also kept the TV on all evening during this work, beginning with CBS news. Took time out to watch Ironside—then returned to cutting. Finally I finished all the cutting—80 some pieces. Then took the photo and cleaned up the mess. Bonnie’s sciatica was too bothersome. Relaxed, watched TV, read, bathed about 1:00.  OBLO  c. 1:15.

Up about 9:00 after Θ. Had breakfast. In the morning I worked at my desk, shaved—spent some time with the mail when it came. About 11 o’clock I walked over to the Building Center to get some brads for the doll house. They were having a sale on screwdrivers: 45¢ apiece—I got four different types—they’re magnetized. I went to the Building Center on foot—the temperature was about 40. Also walked over to confer with Homer Orne, but he wasn’t home—so I came on home. Had lunch. During the noon hour Rev. Wendell Luke called—he’s trying to find a home for a 12 year old girl who’s having family problems. I spent some time phoning about that in the afternoon, but no luck. Bonnie went to work, Debbie was in her room sacked out all afternoon. I did some sermon planning, which I’d been wanting to get to for some time now. I got about 9 sermon ideas together—I have a stack of the “sermon starter” pages from old Christian Advocates—I’m going through those to get ideas. We had supper when Bonnie got home, then after glancing through the newspaper I got to work on the doll house, watched TV as I worked: CBS news, junk programs, plus “They’ve Killed President Lincoln” which was really excellent—a documentary exploring the mystery around Lincoln’s death. Lincoln’s son Robert witnessed the assassinations of both Garfield and McKinley! —I worked on the doll house up til about news time—took a photo of the progress made. Relaxed, read, bathed c. 12:30. OT: Ezekiel 13: NT: Matt 11; OBLO. c. 1:00 AM. 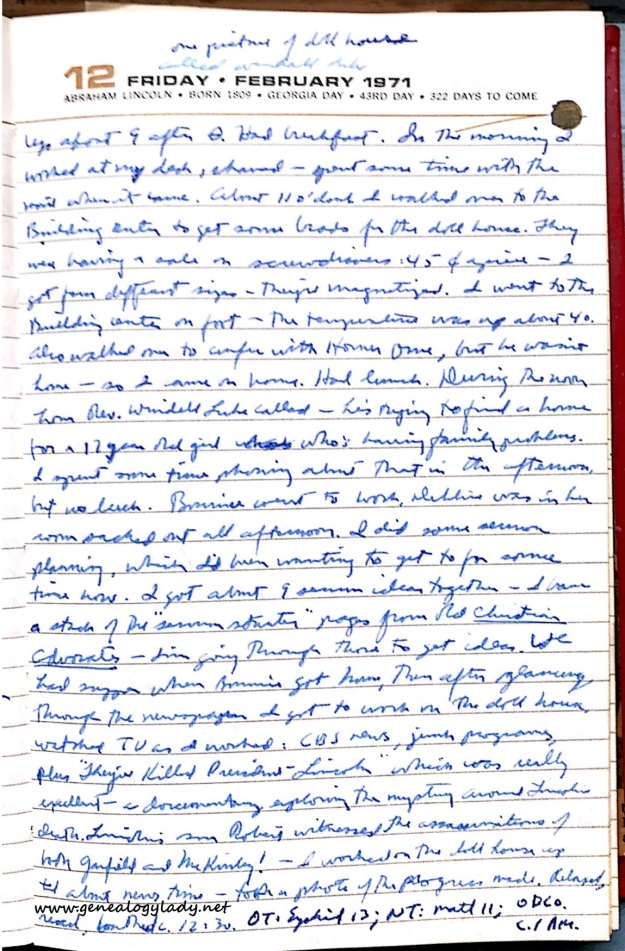