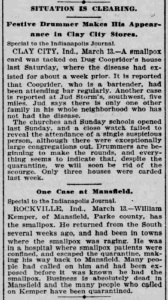 Special to the Indianapolis Journal.
CLAY CITY, Ind., March 13. – A smallpox card was tacked on Dug Cooprider’s house last Saturday, where the disease had existed for about a week prior. It is reported that Cooprider, who is a bartender, had been attending bar regularly. Another case is reported at Jud Storm’s, southwest, five miles. Jud says there is only one other family in his whole neighborhood who has not had the disease.

The churches and Sunday schools opened last Sunday, and a close watch failed to reveal the attendance of a single suspicious person, although there were exceptionally large congregations out. Drummers are beginning to make the rounds, and everything seems to indicate that, despite the quarantine, we will soon be rid of the scourge. Only three houses were carded last week.

One Case at Mansfield.

Special to the Indianapolis Journal.
ROCKVILLE, Ind., March 13. – William Kemper, of Mansfield, Parke county, has the smallpox. He returned from the South several weeks ago, and had been in towns where the smallpox was raging. He was in a hospital where smallpox patients were confined, and escaped the quarantine, making his way back to Mansfield. Many people had called on him and had been exposed before it was known he had the smallpox. Business is absolutely dead in Mansfield and many people who called on Kemper have been quarantined.