The three above pictures appear to have been taken on the same day. The two single portraits were clearly taken at the same location. The group photo shows Gladys and the older woman wearing the same clothing as their individual pictures. Everyone appears to be wearing black or dark colors. Hence my assumption that the photograph was taken around the time of a family funeral. I date the picture circa1925. Gladys was born in 1905 so she would have been 15 in 1920 and 20 in 1925. Gladys’ haircut is straighter and less wavy than it was later in the decade. Her skirt length is short which moves the date further from 1920.   The older woman is wearing a dress styled from the late teens. It was quite common for older people at that time to wear clothes that were more “old fashioned.” Even today the trend continues. 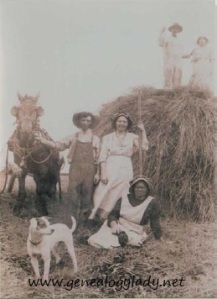 Many years ago I sent a copy of the picture of the older woman to my father’s cousin. She identified the woman as Minerva, Emma’s twin sister. Since the cousin knew Minerva, I generally take her word for it. However, I still say “the older woman,” because I am not 100% sure that she was Minerva (Lawhead) Metcalf.  I have only seen two pictures of Minerva and they are of a somewhat younger woman. The earlier photograph was taken about 1908 and Minerva was plumper and would have been about 36 when the picture was taken. The second photograph was taken about 7-10 years later between 1915-1919. Again the picture shows Minerva with a fuller figure.  Minerva would have been in her early to mid 40s at this point.

Which brings us back to the pictures at the beginning of the post. Do you think that the older woman is Minerva? She seems to have aged too much to be in her 50s. But times were different then. For someone who did hard manual farm labor, they could have aged more harshly. I know she is related to the Foster/Lawhead family. She bears a striking resemblance to Jim Foster (Gladys’ brother). When my grandmother was near her end and Alzheimer’s had robbed her memory, she thought the picture was of her brother Jim. So what do you think?

5 thoughts on “Friday’s Faces of the Past – Family Funeral?”