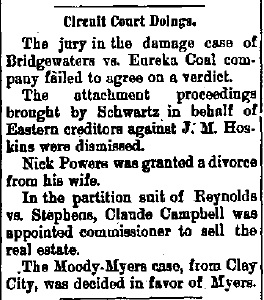 The jury in the damage case of Bridgewaters vs. Eureka Coal company failed to agree on a verdict.

The attachment proceedings brought by Schwartz in behalf of Eastern creditors against J. M. Hoskins were dismissed.

Nick Powers was granted a divorce from his wife.

In the partition suit of Reynolds vs. Stephens, Claude Campbell was appointed commissioner to sell the real estate.

The Moody-Myers case, from Clay city, was decided in favor of Myers.