Your letters of July 9, 10, 11, 12, 13, 14 & 15 came yesterday late, so I read them very rapidly and then re-read them again this A.M. The comment that you made about the comment that I made about the Commander’s wife – was a little shocking to me – you were just a little short and it made me feel badly but then I got to think you probably weren’t serious and I do hope you didn’t think I was serious and I’ll feel terrible if you don’t send any more pictures. I apologize very much.

There was lots in your letters and af even after re-reading I will probably forget things I thought of commenting on. Glad to hear your mother is better – Her progress will be slow and she will be discouraged very much – but she didn’t get in that condition in a short time and it will take a long time to improve. I feel so helpless trying to do or say anything that will help. I guess the only

[page 2] thing I can say is for her to do what the Drs. tell her. You didn’t mention diet which I think is important – maybe she is on one, at least I think irritating foods should be out of her diet – & that includes – all forms of prepared cereal, all raw vegetables, coffee (That’s a bad one for her). Some tea would be OK, and of course milk is OK, if it doesn’t cause too much gas – In other words it is an individual problem – but I really shouldn’t be giving advice since I’m not in on all the information about the lab work etc – You won’t need to bother about sending the details because it’s too long before I could get any info back to you.

Now about the piano – you are correct – my advice is too long in coming to you but you know whatever decision you arrive at will be OK with me – your judgment Dear is OK on things like that, by now you probably have the check I sent and the finances are OK again. That is you should have approximately 700⁰⁰ come to you by Aug. first – The check I sent and your regular monthly check. That should help you over the hump a little.

[page 3] Really I’m at a loss to know why Mark would want to ac look like me – I guess John has a right to talk and reason like I do. You mentioned a plane flying over each day. That really is a lot for Kentland Ind. but how different things must be in other parts of the world – relative to airplanes flying over.

Got a letter from Joe yesterday and he asked me to check to see if his mail was coming to our P.O. I checked and the P.M. said they had gotten a lot of letters for him but could find no one who knew him so they had been sent back just a day or two ago. So his mail will really be late – You might let Mrs. R. know about that. I’m planning on seeing him in a few days if the plans don’t fall thru like they did a few days ago. He was correct about the description of our location but a lot of hard work had something to do with the appearance of the place – we are really proud of our South Pacific Park.

Sorry to hear about Dave M. Yesterday before

[page 4] your letters came I wrote him – I shall add a note to it before mailing.

You never did mention anything about my Masonic dues – In one of these letters you said you were going to find out about the Rotary dues. I guess that is taken care of by now.

A letter came from Mother yesterday and also one from Boonie – I had just mailed one to Boonie before his came – so if you see him you can tell him our letters crossed on the way. I also wrote to Brewers & Walkups & Ed Johnson. Don’t know why the extra writing I’m going but felt I really should.

It seems a shame to have so much to say in one letter and the others have so little – Don’t ever think your letters are not worth sending – They really mean lots and I know it’s hard for you to work a letter in daily with all the responsibilities you have – and please don’t work too hard – seems to me you have lots of work to do so do be careful. And again I hope you didn’t think I was going anything else but kidding you about the picture. 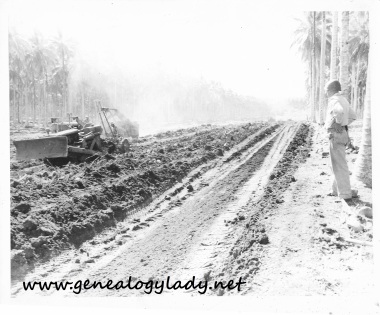 Construction of an airstrip, Russell Islands, 1943