Am writing from Mother’s room. She had a bad spell this morning. Dr. Cole called me – said he had come in to give her a hypo – was giving her shots of Betalin complex – and when he came in the room she was almost gone – she told me the gas was hurting her so – but he said it was her heart. Anyway he gave her coramin injection as soon as possible and she came to. I met Juanita at the train this morning at 4:25 so we came down together. Dr. said he thought I should come down. I tried to get Clara Molter to stay with David & Dannie – she couldn’t come till noon but Mrs. Zell said she would stay till Clara came. Their two older girls are in school & Mr. Zell could take the youngest girl with him. We got down here about 10:30 – Mother is awfully weak & pale. Dr. Cole is sure she has an obstruction but McClelland says no – However she is bloated and I think Cole is right – there is an obstruction there causing the distention. We went out to get some lunch & of course the Dr. came while we were out. However I think he will be back – says he has two O.B. cases going here today, so I’ll probably see him sometime before we go back home. I called him before we went out to eat and I talked to him over the phone, but I want to see him personally.

It is cool today – a coat feels very good. I hope Chet gets some coal in soon. We have enough to last a while but if this cool weather continues it will soon exhaust our coal supply. I have had an order in for coal – weeks or maybe months, but Chet hasn’t been able to get any. I hear that Harlan’s did have some but I imagine he had more orders than he could fill. I was going to have him send me some but Van Scoyck told me he had me down for coal as soon as a shipment came in so I

[page 2] didn’t say anything to Harlan.

I thought Juanita & I would get the washing done & clean up the house and come down this afternoon but when I got the call this morning – before I was up – we got ready & come one. Dr. Cole said I had better stay all day. I told Juanita I was in the garden yesterday evening and didn’t have time to get all the things gathered that need to be – She said she would dig potatoes tomorrow. There are beans & tomatoes that need to be picked. This cool weather is pointing toward an early frost, if it doesn’t warm up soon. Was almost that cold this a.m. Mark’s garden wasn’t quite what it would have been had he had better supervision – but I couldn’t devote the time I wanted to and as much as he likes to do things he needs someone over him all the time. I told Juanita I felt like we got our seed back. We didn’t have to buy any vegetables all summer, canned more than 30 qt. green beans, so far several qts tomatoes & more coming on. Had some cabbage & onions all summer. Will have carrots to store for winter and tho the potatoe crop wasn’t very good have had potatoes to use along. I found in digging yesterday that the hills didn’t have very many potatoes in them. Mark wants to do things but needs company when he does the. His nervousness is at present is completely gone & he has a better appetite. I believe the tonsils were guilty of that trouble because he runs & plays just as hard as ever and has no reaction, so from all appearances the tonsils were harboring infection.

The new bond drive is on & John wanted me to buy him a bond – or rather give him the money to buy one at school – I told him I would give him his allowance in advance but he said he just wanted it outright – however I think he was just trying me out – I told him he could buy our (yours & mine) next bond for us – he said couldn’t he add another name[?]. I said that wouldn’t be fair to Mark & David. Jim sent your letter on to me – Thanks for all the nice things you said about me – so 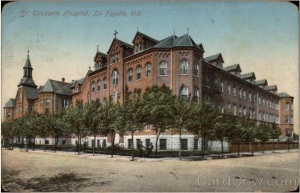