The address I’ll use on the outside will remain the same for several days but you use the one on the inside.

I’m spending the night with my old boss Cmdr. Frericks. Thought while passing thru I’d just stop for a short chat. We are discussing our times together in the days gone by. Just like Old Settlers.

These letters that I’ll write in the next few days will of course be only notes but later on I’ll try to be a little more specific.

Spent last night with Hicky Reinhart and of course we chewed the fat long & loud. Didn’t turn in until way late and was up pretty early in the A.M.

Your letters if you use the address may have a race with me because our mail had been much faster in the last few days. I’ll do better in the next few days. 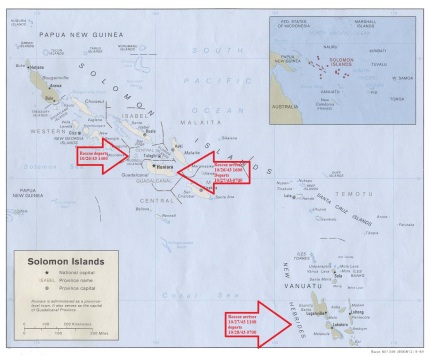 Map courtesy of the University of Texas libraries http://www.lib.utexas.edu/maps/australia/solomon_islands_pol89.jpg