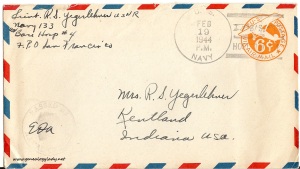 I’m writing this at about 10 PM. Had the duty today and went to see the show “Bambi” and now that I have settled down – got a coke before me and after having read the Kentland Democrat and Newton Co. E., the only mail today, maybe I can write something of interest I hope.

I now have two Newton Co. E.’s and two Democrats to pass along to Mulligan. I’ve been giving him a pretty good supply in the past week.

[page 2] you mentioned that the Lontz boy was still in N.C. I feel sorry for him – staying in that one awful place for so long. It isn’t so bad there but it sure would get under my skin to not move around more than that. Of course I could settle in one place in the U.S.A. but if I have to be out I’d I sure like to be moving. No moss for me and you know – the rolling stone. Maybe that doesn’t sound like me and it really wasn’t like me there but things are different here.

I think one time several months ago I wrote a letter using appreciation as the basis. That increases as time goes along. I believe I appreciate you, family, and home more now than ever. The two years away have certainly been long

[page 3] and cruel but they certainly have served a purpose in so far as bringing out the appreciation for you, home & friends. Maybe I’m all wet but had I been home all this time I believe we would have appreciated each other less than at present.

Maybe the above all sounds silly but I sure don’t mean it that way. It’s really hard to put into a letter just how one really does feel at least it’s hard for me to do so.

I guess you really put me in the Dog House with our neighbor Zell. It seems you at some time or other mentioned to him how I felt about County Agents who didn’t take their trade too seriously and he doubted if he were in the “good grace” of our family especially me. Just

[page 4] how strong did you make it? I still think I’m a little right about one of them who ran for the good old Earth when he felt it would keep him from Uncle Sam’s army. Too good to be a farmer at one time, but too fine when it isn’t serving too much of a purpose. That may sound silly also but I did have a point to make. And please explain to Mr. Zell that it’s not his profession in general but only the exceptions. I know he was just kidding and I got a kick out of the whole affair – Just as I hope you do out of the question I asked at the top of this page. 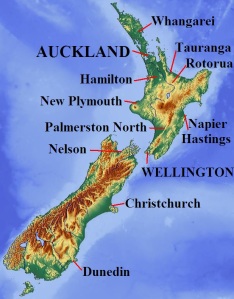 1 thought on “Something of Interest (Roscoe)”