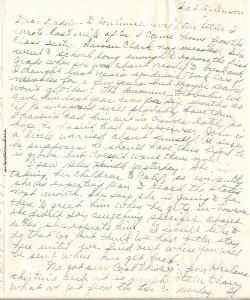 Dear Daddy – to continue with the letter I wrote last nite after I came home from the class party. Susan Clark has measles. She went to school long enough to expose the first grade when she was about ready to break out. I thought last year’s epidemic took care of measles for a few years but maybe David won’t get them. The immune globulin we gave him last year was for six months so if he is exposed will probably have them. I haven’t had him out in crowds lately so hope he hasn’t had an exposure. John is a little worried about himself. He says he supposes he should have them before he is grown but doesn’t want them now. 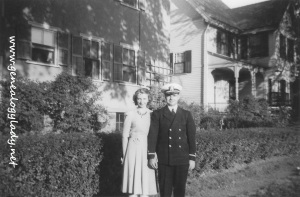 I saw Helen Heindle yesterday. She is taking her children to Calif., so evidently she is expecting Dan to reach the States next month. She says she is going to be there to greet him when he gets in – however she didn’t say anything specific about when she expects him. I would like to do that too but think we had better stay here until we find out where you will be sent when you get back.

We got more coal this a.m. – from Harlans this time and it is much better than what we got from the Lbr. Co. Monday. If 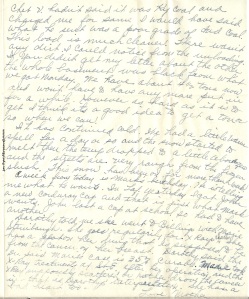 [page 2] Chet V. hadn’t said it was Ky. Coal and charged me for same I would have said what he sent was a poor grade of Ind. coal. This load is much cleaner. There wasn’t any dirt I could notice from the unloading. If you didn’t get my letter about the other the whole basement was black from what we got Monday. We have about 4 ½ tons now and won’t have to have any more put in for a while. However as hard as it is to get I think it’s a good idea to get a ton or so when we can.

It has continued cold. We had a little warm spell for a day or so and the snow started to melt then the temp dropped to a little above zero and the streets are very rough from the frozen slush. This snow has been on for more than a week.

A week from today is Mark’s birthday. He is telling me what he wants. In Laf. yesterday I got John a new corduroy cap and that is just what Mark wants. John lost a cap at school so had to have another.

Dorothy told me she went to Billings with Marie Steinbaugh. She goes regularly for X rays checks. She has a spot on her lung that is supposed to be from the cancer on her breast. Doroty said the Dr. said Marie’s case is 35% curable. Marie took X-Ray treatments at St. E. after her operation and the X-Ray supposedly scattered or rather drove the cancer in – that is Dorothy’s interpretation. She as a bad heart, too. 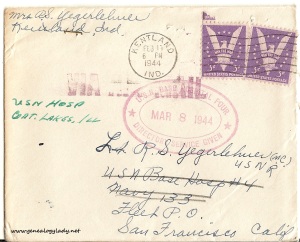 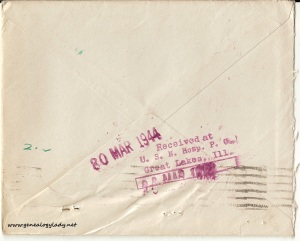