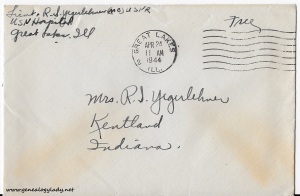 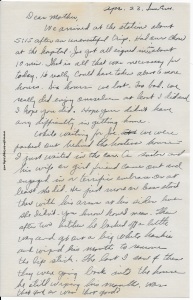 We arrived at the station about 5:15 after an uneventful trip. Had our chow at the hospital. Joe got all singed in in about 10 min. That is all that was necessary for today. He really could have taken about 6 more hours. Six hours we lost – Too bad. We really did enjoy ourselves at least I did and I hope you did. Hope you didn’t have any difficulty in getting home.

While waiting for Joe abt we were parked out behind the hostess house – I just waited in the car. A sailor and his wife or girl friend came out and engaged in a terrific embrace, or at least she did. He just more or less stood there with his arms at his sides but she didn’t – You know how I mean. Then after two hitches he backed off a little way and got out a big white hankie and wiped his mouth to remove the lipstick. The last I saw of them they were going back into the house he still wiping his mouth. Was that good or was that good?

[page 2] Joe and I went for a walk but it was cut very short by a storm – or rather thunder and lightning cut the trip short. So far it seems to have missed us, however, and it is now about 9:00 and will soon be bed time. Our radio is going – seems to work good with only a short antennae.

Joe is writing also so maybe you both will get letters Tue. I’m running out of things to write much just now. It’s been only a short time since I’ve seen you and things haven’t happened so much as yet. I guess I should write the Folks one of these days but just can’t seem to get started on such.

Well, hope you aren’t too down in the dumps tonight –
Lots of Love
Daddy

1 thought on “Back at the Station (Roscoe)”