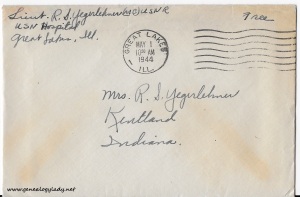 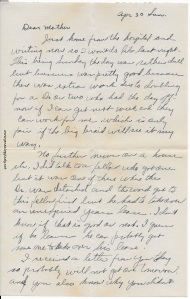 Just home from the hospital and writing now so I won’t do like last night. This being Sunday the day was rather dull but business was pretty good because there was extra work due to doubling for a Dr. or two who had the day off – now if I can get next weekend they can work for me, which is only fair if the big braid will see it my way.

No further news on a house, etc. I did talk to a fellow who got one but it was one of these where the Dr. was detached and the word got to this fellow first but he had to take over an unexpired year’s lease. I don’t know if that is good or not. I guess if he leaves he can probably get someone to take over his lease. 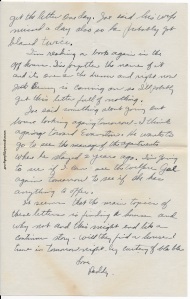 [page 2] get the letter one day. Joe said his wife missed a day also so he probably got blamed twice.

I’m reading a book again in the off hours. I’ve forgotten the name of it and it’s over on the dresser and right now Jack Benny is coming on so I’ll probably get this letter full of nothing.

Joe said something about going out house looking again tomorrow – I think again toward Evanston. He wants to go to see the manager of the apartments where he stayed 2 years ago. I’m going to see if I can see the welfare gal again tomorrow to see if she has anything to offer.

It seems that the main topics of these letters is finding a house and why not and this might end like a continue story – will they find a house? Tune in tomorrow night – by courtesy of bla bla