After May 2nd, 1944, the letters go silent for a week. While Roscoe and Gladys were writing letters to each other further north, in Clay City, Indiana, a family tragedy was taking place. During the day, Roscoe’s oldest brother Sam fell off the back of a truck while working on his farm. He fractured his skull during the fall and died several hours later. At this point, it is unknown whether or not Roscoe, Gladys & the children traveled to Clay City for the funeral. Romaine, the daughter of Ruth (Yegerlehner) Mutchler, does not recall attending the funeral, although she does remember the sadness which accompanied the tragedy. With gas rationing and other travel limitations in effect during WWII, it is hard to say whether or not the family did go. However, the lack of letters would indicate that Roscoe and Gladys were together. 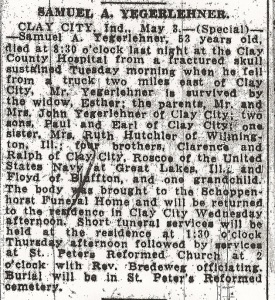 CLAY CITY, Ind., May 3. – -(Special)- – Samuel A. Yegerlehner, 53 years old, died at 8:30 last night at the Clay County Hospital from a fractured skull sustained Tuesday morning when he fell from a truck two miles east of Clay city. Mr. Yegerlehner is survived by the widow, Esther; the parents, Mr. and Mrs. John Yegerlehner of clay City; two sons, Paul and Earl of Clay city; one sister, Mrs. Ruth Hutchler of Wilmington, Ill.; four brothers, Clarence and Ralph of Clay City, Roscoe of the United States Navy at Great Lakes, Ill., and Floyd of Bluffton, and one grandchild. The boys was brought to the Schoppenhorst Funeral Home and will be returned to the residence in Clay City Wednesday afternoon. Short funeral services will be held at the residence at 1:30 o’clock Thurdsay afternoon followed by services at St. Peters Reformed Chruch at 2 o’clock with Rev. Bredeweg officiating. Burial will be in St. Peter’s Reformed cemetery.

1 thought on “A Family Tragedy”