The pullman bag was sent out this AM via parcel post, so you should have it in plenty of time.

I hope you are able to get seats on the train OK. As I said in a letter before try to get there early and when the porter gets your bags, etc., ask him about seats and give him a tip of a buck or some such amount to have him get you a good seat or two seats rather. In case you can’t get seats on that train call me at the station so I’ll know you aren’t coming that way. You probably will check the pullman bag and the sea chest and carry the other small bags with you. If the linens and towels don’t come thru right away I can borrow.

So far as I know there is no change in the schedule here for the 16th and it sure can’t come too soon. This has been the longest 10 days or however long it is up to now. Seems longer than the over sea time. Hope I don’t sound too bad. There just isn’t much to do around here and a hotel room 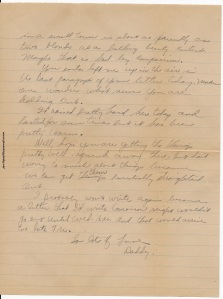 [page 2] in a small town is about as friendly as two blonds at a bathing beauty contest. Maybe that is bad by comparison.

You sorta left me up in the air in the last paragraph of your letter today. Makes one wonder what news you are holding out.

It rained pretty hard here today and lasted for some time but it has been pretty warm.

Well, hope you are getting the things pretty well squared away there, but don’t worry too much about things because we can get things them eventually straightened out.

I probably won’t write again because a letter that I’d write tomorrow night wouldn’t go out until Wed. AM and that would arrive too late Fri.

So lots of Love
Daddy