It seems the mail must be crossed up for I didn’t receive any today but I suppose I’ll receive 2 or three tomorrow. I think it’s the way the letters clear out of Chicago or either how they unclear here.

Well, I went out to the Stanishs’ last night and we had a real old get together. It was just he and I but it seemed we had so many things to talk about. They have one boy 7 years old – red headed sandy faced. His mother is a pretty decided blond but not dizzy. They came from a small town in Montana and are just plain country people at heart. He was an engineer before the war and had lived in Los A. for a time.

Their home now is in one of the gov. projects. They have 5 rooms fair size. All utilities furnished for $41.00 per mo. The only drawback is the ice box in the kitchen. It really isn’t what one would want to town but very nice for what they need it for 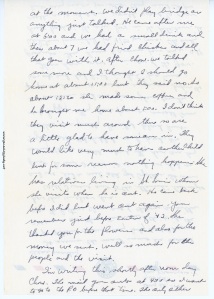 [page 2] at the moment. We didn’t play bridge or anything just talked. He came after me at 6:00 and we had a small drink and then about 7 we had fried chicken and all that goes with it. After chow – we talked some more and I thought I should go home at about 11:00 but they said no. So about 12:30 she made some coffee and he brought me home about 1:00. I don’t think they visit much around there so are a little glad to have someone in. They would like very much to have another child but for some reason nothing happens. She has relatives living in St. Louis whom she visits when he is out. He came back before I did but went out again – you remember just before Easter of “43. She thanked you for the flowers and also for the money we sent. Well so much for the people and the visit.

I’m writing this shortly after noon day chow. The mail goes out at 4:00 so I want to go to the P.O. before that time. The only other

There isn’t much doing around now – I have 12 patients on a 126 bed ward and many of the other wards are the same. I imagine will probably get several patients in the next few weeks – possibly some prisoners from Japan. That is if they are in need of prolonged medical attention. However that is only a guess on my part.

Stanich thinks he will be getting out in a month or so. That was encouraging to me because if they begin to let out line officers they will cut down on the staff before too awful long at least I hope that is true. They seem to be very confident that they will be going back to White Fish, Montana in the near future. I asked what kind of heat fuel they used there and they said “wood”

[page 4] There is no coal and I guess oil heat hasn’t been adapted around there. They have a gas heater in their house here. It’s just a new house and the lawn is all ploughed up and very dry and when the wind blows the dust sure goes places.

I hope I haven’t bored you with all the talkie talkie about these people but when one gets out for a few minutes and sees something different it’s really news.

There is a clinical conference of all the Drs. this PM at 1:30 – Just the routine hospital staff meeting. Some cases will be discussed and possibly they will have some dope on our moving. I’d like a table to write on and a few little things like that although I have done without before so maybe I shouldn’t complain.

Hope to get some of your back letters tomorrow
Love Daddy

1 thought on “Dinner with the Stanichs (Roscoe)”