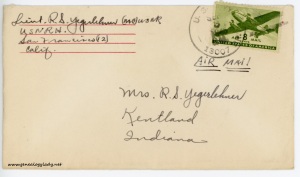 I’m on the ward but wouldn’t have to be since it is Labor Day but in order to get breakfast one has to be there by 0830. It is now about 1000 but I want this to be sure and get off in the mail which I suppose leaves around 12 as it does on Sun.

In one of your letters you mentioned the fact that I heard all of the discharge stuff over the radio. I haven’t heard a radio since I left home. They have them on the wards but my room is too far from it and anyway they don’t listen to much news.

I see by this AM paper the army is cutting down on the points and lowering the age. I just don’t know how or when the navy is going to start but they will have to before long if they intend to get rid of all they plan on in the 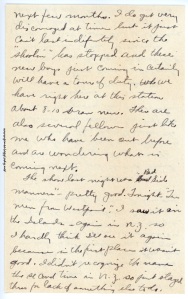 [page 2] next few months. I do get very discouraged at times but it just can’t last indefinitely since the “shootin’” has stopped and these new boys just coming in certainly will have a tour of duty. We have right here at this station about 8-10 brand new. There are also several fellows just like me who have been out before and are wondering what is coming next.

The show last night was “Bedside Manners” – pretty good. Tonight – “Ten Men from Westpoint.” I saw it on the Islands – again in N.Z. so I hardly think I’ll see it again because in the first place it wasn’t good. I didn’t recognize the name the second time in N.Z. so just stayed thru for lack of something else to do. 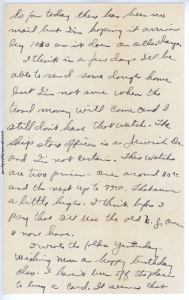 [page 3] So far today there has been no mail but I’m hoping it arrives by 1030 as it does on other days.

I think in a few days I’ll be able to send some dough home but I’m not sure when the travel money will come and I still don’t have that watch. The ship store officer is a Jewish Dr. and I’m not certain. Their watches are two prices – one around $30.00 and the next up to $77.00. That seems a little high. I think before I pay that I’ll use the old N.Z. one I now have.

I wrote the folks yesterday – wishing Mom a happy birthday also. I haven’t been off the place to buy a card. It seems that

[page 4] was about all the letters I could scrape up in one PM.

I’d keep reminding Chet once in a while about that burner. He should know all about that type furnace since it is practically the same as Nick’s down to the controls, etc. He claims he is going to reduce the heat bill for Nick. I believe I’d try to get the fuel oil from either Standard of Schub – unless you could work out a 3 way deal. I’ve thought of the burner because it is so cold here, seems like the dead of winter only without snow.