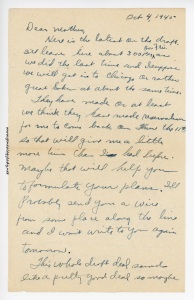 Here is the latest on the draft. I’ll leave here about 3:00 p.m. on Fri. as we did the last time and I suppose we will get in to Chicago or rather Great Lakes at about the same time.

They have made or at least we think they have made reservations for me to come back on Thurs. the 11th so that will give me a little more time than I had before. Maybe that will help you to formulate your plans. I’ll probably send you a wire from some place along the line and I won’t write to you again tomorrow. 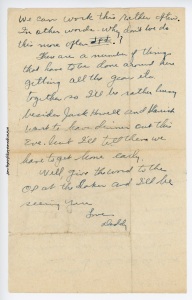 [page 2] we can work this rather often. In other words – why don’t we do this more often?

There are a number of things that have to be done around here getting all the gear, etc., together so I’ll be rather busy besides Jack Howell and Stanich want to have dinner out this eve but I’ll tell them we have to get home early.

Well, give the word to the O.D. at the Lakes and I’ll be seeing you.
Love Daddy