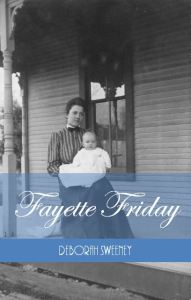 I will, while writing to Ella send you a few lines by same stamp. Dr. Jackson was up and took dinner with us Wednesday. There was a large attendance at the funeral of Sister Muths, the funeral was preached at the Church. I went to the country night before last, and as the Director of the school house would not give up the key with written word from Trustee, I did not preach. But on yesterday morning we got a key from the Trustee and I will go back next Tuesday. Wednesday week ago Dr. Spurgeon and I went into the country some three miles from town to marry a couple. We had a good

[page 2] time. The Dr. said that some time ago he found a girl he thought would make a good wife, but that he found her to be the wrong one for him. I suppose he meant Miss Bartholamew. He said he intended to marry when he thought he would better himself.

I received your card last night. Received a letter from Bal. [tear in paper] are well. Have more on hand than I can get through with. Have had a cold for two weeks and it makes my head-ache most all the time. Your writing on postal cards is so erased that I cannot make out what you say either about A.J. & M—or about the Dr. The Dr. told me that the same day that he send a letter to you, he received one from you.

Write at once and ask your questions again. Ettie sends love. 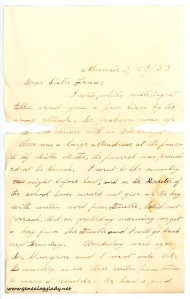