Up about 9:00—the phone rang to get us out of bed; Carol Lewis wanted to go to the rummage sale. So we got up—since I needed to leave for Boston at 11:30. We had breakfast, Bonnie left, Debbie played in her study, and I worked at my desk. I was about ready to leave when Bonnie got home. I got on the road about 11:45. My destination was the Massachusetts Eye and Ear Clinic to be with the Hannibals. I got there slightly before 1:00—just after Rip was taken into surgery. Florence and her daughter of same name didn’t arrive until about 3:00—I got some reading done before they arrived—then we waited together. It was a longer wait than had been expected. Finally about 5 o’clock Rip was wheeled into the room. He really wasn’t awake—pretty groggy. But we stayed with him a while. I called Bonnie to tell her I wouldn’t be home for supper, then the 3 of us went to the hospital cafeteria—lousy food, but it eliminated the hunger. Then we went back to Rip—he was coming around now—and his wife was able to feed him some noodle soup. We also had a brief conversation. I left about 7:00—came home, arrived shortly after 8:00—then I went down to Patriquins to join Bonnie + Debbie; we watched Ironsides and Odd Couple—came home shortly after 10:00; relaxed; bathed—then OBLO, watched TV news—read, LO before midnight  Θ+

Didn’t get up til about 9:30—had breakfast—but it was a slow morning. I read the paper (last evening’s), then read some in Newsweek. Bonnie went over to Gloucester to pick up the surplus food that we’re getting now. She arrived back about 11:30. I helped her get it into the house—we looked over it together. We ate about 12:15, then Bonnie went to work, Debbie went to her room. I just vegetated for about a half hour. Then I got to work on my sermon—this occupied me most of the afternoon. I got about 90% of it done before I began working on supper—I had it almost ready by the time Bonnie arrived home from work. She is beginning to get very fatigued late in the day now—and this evening she was slightly nauseated—so the same problem she had with her first pregnancy is probably recurring. We watched CBS news—relaxed; I then worked more on my sermon. Got it finished, although when I do the final copy there will be polishing. About 8:30 I took Debbie down to Patriquins, then came home. Carol and Jerry Lewis picked us up—we went to Gloucester to see “Catch-22”—a sickening film—I didn’t care for flashback techniques or the gore—but it certainly leaves one with a disgust for war. Got to Patriquins about 11:30. Came home immediately, bathed; OBLO c. 12:30

Up about 9:00. Shaved; had breakfast. While I was eating Florence Hannibal called with the news that Rip was going to be coming home today—which meant we wouldn’t have to be making the trip into Boston which we had been planning. I went over to Silva Brothers and bought a flowering plant to take to him in the afternoon. After lunch I worked on my sermon for a while—writing out the final draft. Then about 2:00 I went on my calling. I went to Hannibals’ first—took the plant. Rip was looking very well—he seemed very happy to be home. Most important, the terrible ringing in his right ear has been eliminated—there’s still noise there, but it’s bearable, and is expected to diminish. I stayed there about 1½ hours, then I drove over to High Street to see Forrest Clark’s in-laws, Mr. + Mrs. Hilton. They are elderly—he especially. They have been coming to church occasionally. I was home about 4:30. Then I got back to work on my sermon. About 5:15 we worked on supper. Bonnie is now beginning to have the evening nausea which we had to live with during the first pregnancy. She has been exhausted all day—we had to laugh when she started searching for the old standby: tuna. After supper I did some phone calling—but worked on the sermon + the service. Bathed. Θ when Bonnie went to bed shortly after 9:00—but I worked late, til almost midnight OBLO, 12:20.

Up shortly after 8:00. Had breakfast after shaving; practiced part of the sermon. My class arrived—6 in all, we talked again about Jonah—we read it again, since the 3 who were here last week didn’t seem to remember much. I got to the church about 10:40—preached on the environment—this was Part II in a 3-fold series on modern problems. The Marrs returned today—and were completely civil despite the banners which have gone up since they left. We got home about 12:30—Bonnie went to bed, she had a sore throat—plus pregnancy fatigue. I fixed her lunch, brought it to her. Then Debbie and I had lunch. After she too was put down for a nap, then I relaxed before straightening up the kitchen somewhat. Just before I was ready to leave for the Den-Mar for the 3 o’clock service, Debbie took a tumble in her room, cut the inside of her mouth—she was bleeding and was quite distraught—got a splash of blood on my shirt when I picked her up. But she calmed down. From 3:00 to 3:50 I was at Den-Mar—then 4:00–5:30 at St. Mary’s for a meeting of the JYF steering committee. Came home, worked on supper, after which I just relaxed for a while. Then about 7:30 I got to work at my desk, tended to several things, although I didn’t have much ambition; about 10 o’clock Bonnie and I had a snack, then we got our baths, OB read, LO, c. 11:40. 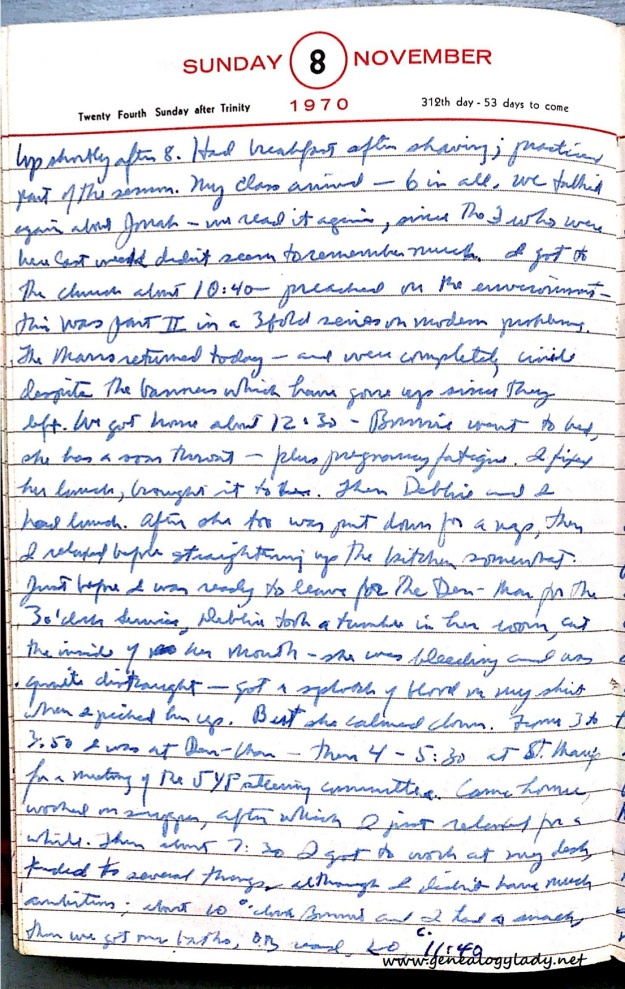