Another three photographs create a grouping in my collection. Since everyone is dressed in black—at least they seem to be in the black & white photographs—I assume the foursome attended a funeral. Again, the time frame appears to be the mid to late 1920s. None of the women are wearing jackets, but the ground is covered by a light layer of snow. The tree limbs are bare. The photographer is unknown (since they never make an appearance). The petite woman standing next to Gladys is believed to be her Aunt Minerva, fraternal twin to Gladys’ mother Emma. Minerva’s dress is old-fashioned compared to Gladys’ stylish frock. The longer skirt hem and squarish collared neckline hearkens back the the World War I years. James (Jim) and Emma stand in the background. He was quite tall; his shoe can be seen on the ground next to Minerva’s feet. While Emma stands on the lower step—her boot just visible behind Gladys’ legs—creating the illusion that mother and son are the same height.

I do not know whose funeral generated these photographs—especially since the mood is not particularly somber. Gladys smiles in both pictures. I have not discovered a Foster or Lawhead relative, living in the Terre Haute area, whose death occurred in the late 1920s, who would have prompted such a reunion. Perhaps I will someday… 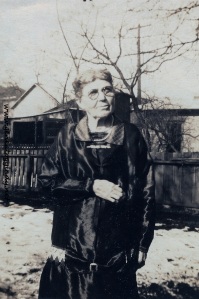 [Photographs from the author’s private collection.]

2 thoughts on “A Funeral”