HARD ON CANDIDATE.
Frank Hines Is Compelled to Give Up
His Canvas.

Three cases of smallpox were reported to the State Board of Health yesterday by Dr. McLain, of Scott county. The board also received a complaint about a man that escaped from quarantine in Vanderburg county and went to Crawfordsville. A more rigid enforcement of the quarantine laws was asked for.

The board confirmed the diagnosis of the disease prevailing at Brookville as smallpox.

Dr. Cox, health officer of Owen county, says that a physician in that county maintains that the disease is chickenpox and is causing the local health officers lots of trouble.

Frank Hines, who was making a canvass for the nomination for sheriff in Delaware county, has contracted a case of smallpox and has been forced to give up his canvass. 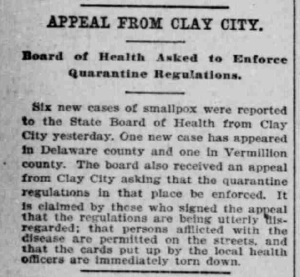 APPEAL FROM CLAY CITY.
Board of Health Asked to Enforce
Quarantine Regulations.

Six new cases of smallpox were reported to the State Board of Health from Clay City yesterday. One new case has appeared in Delaware county and one in Vermillion county. The board also received an appeal from Clay City asking that the quarantine regulations in that place be enforced. It is claimed by those who signed the appeal that the regulations are being utterly disregarded; that person afflicted with the disease are permitted on the streets, and that the cards put up by the local health officers are immediately torn down.

ONE CASE AT ALBANY

Is Reported to the State Board –
Cases in Jackson County.

One new case of smallpox was reported to the State Board of Health yesterday from Albany, Delaware county. Many men who are employed at Albany live in the town of Redkey, four miles away, and the Board of Health of that place has forbidden them to go to Albany.