LETTERS ARE RECEIVED
Containing Information About Health
Conditions Over the State.

A letter was received by the State Board of Health yesterday from Redkey, in which the writer complained to the state board that the local board of health was not exercising proper precaution in preventing the spread of contagious diseases.

Dr. Cox, health officer of Owen county, informed the state board that there had been no new cases of smallpox in that county outside of infected houses for more than three weeks. He says the disease has been kept out of all the trading centers, and as a consequence the business interests of the community did not suffer. He says the best of results have been obtained in that county through the hearty co-operation of the people.

HARD ON CANDIDATE.
Frank Hines Is Compelled to Give Up
His Canvas.

Three cases of smallpox were reported to the State Board of Health yesterday by Dr. McLain, of Scott county. The board also received a complaint about a man that escaped from quarantine in Vanderburg county and went to Crawfordsville. A more rigid enforcement of the quarantine laws was asked for.

The board confirmed the diagnosis of the disease prevailing at Brookville as smallpox.

Dr. Cox, health officer of Owen county, says that a physician in that county maintains that the disease is chickenpox and is causing the local health officers lots of trouble.

Frank Hines, who was making a canvass for the nomination for sheriff in Delaware county, has contracted a case of smallpox and has been forced to give up his canvass. 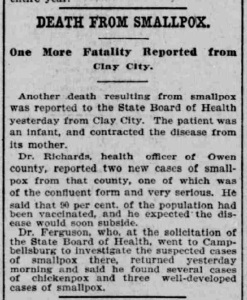 Another death resulting from smallpox was reported to the State Board of Health yesterday from Clay City. The patient was an infant, and contracted the disease from its mother.

Dr. Richards, health officer of Owen county, reported two new cases of smallpox from that county, one of which was of the confluent form and very serious. He said that 90 per cent, of the population had been vaccinated, and he expected the disease would soon subside.

Dr. Ferguson, who, at the solicitation of the State Board of Health, went to Campbellsburg to investigate the suspected cases of smallpox there, returned yesterday morning and said he found several cases of chickenpox and three well-developed cases of smallpox.

Dr. Hurty Says the Disease Is Yet in a
Mild Form-Cases in the City
-At Clay City.

Dr. J. N. Hurty, of the State Board of Health, in speaking of the smallpox conditions last night said that a number of new cases had been reported to him from Putnam, Clay and Miami counties and that in his opinion the conditions were becoming serious. “You might as well say,” said he, “it is going to be everywhere. Might as well locate it everywhere in the State, for that is what it is coming to.” He said all precautions necessary were being taken to prevent the spread of the disease, but the people, and especially those living in Clay county, think on account of the present mild form of the disease there is but little danger and that they are at liberty to carry the disease wherever they see fit to go, with no regard for the quarantine. A large majority of the cases reported have been traced to Clay City. One case at Peru and another from Putnam county reported yesterday were in families members of which had recently come from Clay City.

“The death rate,” said Dr. Hurty, “will be greatly increased this year. Possibly not from deaths by smallpox, which is now of a mild form, but from the after effects, just the same as with the grip.  You know people used, seven or eight years ago, to laugh at the grip and the papers were full of cartons on the subject. But during the last few years they have learned that the grip in no joke. In fact, it has been shown to be more fatal than a number of other diseases more dreaded. It will be the same with smallpox. I think, though, the people will understand this after awhile and we will get it stopped.”

Dr. Hurty said he had been advised yesterday that a doctor in Vanderburg county had been fined there a day or two ago for not reporting a case of smallpox to the Board of Health.

In Indianapolis there have been no new cases reported. A. C. Burnham and wife, of 330 North Beville avenue, were removed yesterday from their home to the contagious pavilion at the City Hospital, where they will be cared for better than at home. The house was closed and will be disinfected to-day. It will then be disinfected two or three times and the quarantine raised, thus relieving the city of the expense of keeping up the quarantine. Burnham and his wife have the disease in a very mild form and as it was found soon after breaking out it is thought few exposures resulted and there will be no new cases develop from this source.

City Sanitarian Clark said the matter of building a pesthouse would be presented to the city authorities this morning, with rough plans of the building, which will, as now considered, accommodate thirty to fifty patients and it is thought the necessary permission to use the grounds will be given. The contagion pavilion at the hospital, which is not connected in any way with other wards at the hospital, will accommodate at least twenty patients.

Drs. Hurty, Clark, Ridpath and Ferguson, who were called upon to investigate a case in the home of a man named Leffingwell, on Linwood avenue, near Michigan street, reported yesterday that the afflicted child had chickenpox instead of smallpox.

Smallpox at Clay City.
Special to the Indianapolis Journal.
CLAY CITY, Ind., Jan. 21. – Health Officer Dr. Modesitt has had considerable difficulty in trying to keep smallpox suspects off the street, but with the aid of deputies he is getting them pretty well under control. The doctor is working day and night to secure the enforcement of the order and the people, with a few exceptions, are aiding him in the attempt to confine the disease to places where it now exists.

A few new cases are being reported, but mostly in localities where it already existed. The older cases are all reported better and but few are confined to their beds. No deaths have occurred. All outgoing mails are being disinfected. Every precaution is being taken to prevent the persons who have the disease and those from houses where it exists from going to the postoffice.

Five cases just east of here, in Owen county, were reported to Dr. Modesitt this morning and he reported them to the Spencer Health Board. A few cases have been reported here from Centerville, Jasonville and from the country west of here four miles. As far as heard from they are all mild cases.

Refuse to Get Excited.
Special to the Indianapolis Journal.
TERRE HAUTE, Ind., Jan 21. – Terre Haute physicians and public at large refuse to be excited over the reports made by the Indianapolis doctors of the spread of smallpox in this part of the State. The physicians say there have been cases of chickenpox here and that one case, now isolated, may be smallpox, but they believe that it is not true, as asserted, that all of the cases at Clay City could have been smallpox. It is possible that the appearance of smallpox and chickenpox is a coincidence. Reports have been received from many places near here of chickenpox, and in some instances it has been so prevalent that schools were closed for lack of attendance.

Smallpox in De Kalb County.
Special to the Indianapolis Journal.
BUTLER, Ind., Jan 21. – A great many cases of smallpox have developed twelve miles south of this city. Members of the Tracy, Bishop and Furnace families are down with the disease. Hicksville, O., physicians have had charge of the cases and failed to report them to the Indiana authorities. Much excitement is manifest.