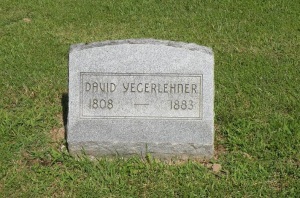 David Yegerlehner (originally Jegerlehner) was the immigrant ancestor of Roscoe’s family in America. David arrived with his wife, Magdalena, and three children, Christian, John and Rosina, in 1851. They were natives of Bern, Switzerland. While each of the three children settled in different areas of Indiana, David stayed with his eldest son Christian. When Christian bought land in Clay County, Indiana, David set up his carpet weaving shop across the road from the farm house.

David’s grandchildren erected this modern stone at the cemetery in his honor.