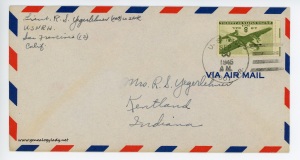 Just back from Klamath Falls, a bath taken and your letter read – The one which you seemed to be down. I got back just in time to hear the tail end of the N.C. & Ill. Ballgame. I’m now listening to the Navy-Marine game.

You wrote of being down. Well, I’m up and then down – There is one bright ray however and that is that I’ll be bringing a draft that way before long as I’ve told you before – It sorta depends on how many patients came in that are from the Mid West.

I just got a call from (jr.) Dr. Cummins his orders were changed to read to Pearl Harbor and he is flying – leaving in the morn. So he is coming out for a while this eve. There isn’t anything else I want to do so I’ll talk with Jr.

Before I forget – I didn’t write yesterday – only very early in the a.m. – I was busy most of the day getting rid of patients and getting transportation home – Had to come on the train this time. It took about 15 hours to get back. So since I wrote you last I’ve spent about 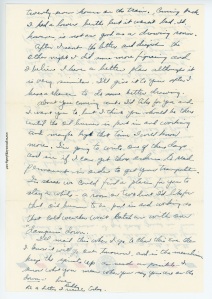 [page 2] twenty-seven hours on the train. Coming back I had a lower berth but it wasn’t bad. It, however, is not as good as a drawing room. After I sent the letter and diagram the other night I did some more figuring and I believe I have a better plan although it is very similar. I’ll give it to you after I have a chance to do some better drawing.

About you coming out. I’d like for you and I want you to but I think you should be there until the oil burner is put in and working and maybe by that time I will know more. I’m going to write one of these days and see if I can get those orders to read permanent in order to get your transportation. I’m sure we could find a place for you to stay a while – a room or two but I’d like for that oil burner to be put in and working so that cold weather won’t catch us with our “dampers” down.

I’ll mail this when I go to chow this eve, then I know is will go out tomorrow and in the meantime keep the spirits up as much as possible. I know what you mean when you say you are on the down.