Just a line to let you know where I am. Enjoying good health even tho it is hot down this way. Enclosing some Japanese occupational money for the Boys think they will enjoy receiving. Most of it is for the Philippines but some is Dutch money. The value is

I am not sure as to the value of the Dutch money but I think a gulden is the same as our dollar.

Be sure to let me know where Jake is sent. This is someplace, all shot up, in almost complete ruins. Our next stop is Japan. 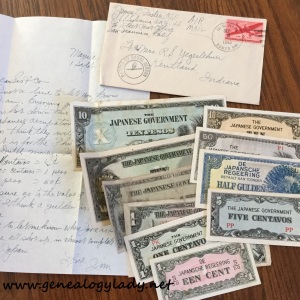 We just hit a port long enough to take on supplies and the mail, I had several letters and among them one from you which I now have before me to answer. I need not be in any hurry to answer as it will be three or four weeks before we hit another port but I like to keep my correspondence up to date as I do get lots of letters and I try to write a line or two to Thelma every day or so. Was sure glad to learn that you got John in Northwestern University, bet he is one of their youngest boys. I am going to drop him a line and also send him a birthday card but I seem to have either lost the card I had to send him or else I mailed it already, I believe I wrote and asked you about it so if I did not mail it I will explain it all to him when I write. My, my Sis you do have your troubles now and then, hope David is completely recovered from the pox by now.

Have two letters from Pauline, one from Lovelock and one from Penn. She has left Glenn and says he has made no attempt to get in touch with her or to learn how the boys are. I am going to try to help such as it is from away over the high seas. I just can’t understand why Glenn is acting up so. (James L. Foster CSF)

[page 2] Things are going along fine on board the Sylvania. While I would much rather be back in civilian life as long as there is a war on I am going to make the best of whatever my lot is. I am enjoying this duty, have plenty of work, keeps me busy all day and sometimes part of the night. I am the plumber, my work is looking after the fresh and salt water lines and the drainage. Also have had quite a bit of piping to do, changing this line and that line and running new pipe lines, I enjoy it tho. Last week a fire main in Officer’s Country broke, flooding several rooms before we got it secured.

Thelma is now in Washington working, she returned to T.H. in June and soon was signed up for a job. I got five letters from her in the mail today, one written on the 19th stated she was getting ready to leave for Washington the next day so by the time I hear from her again she will be all squared away. I hope Harvey has my car in N.Y. and will keep it until I return. Notice my new address. You should have no trouble guessing about where I am.

[Editor’s note: For more information about the history of the USS Sylvania, click here.]

According to the very last entry in the baby book, David broke out with the chicken pox on June 29th. From a letter which Gladys wrote to her brother Jim in 1983, she recalled the chicken pox adventure, “Well, we got to thinking about during the war, I had gone to Kentland with the children and David broke out with chicken-pox and I could not return on the train, so Jake drove 500 miles to get us, then headed back to Liberty, Mo., without any sleep. He drove 1,000 miles without any rest. We couldn’t even go into a restaurant, so Mark and I went to a grocery store and bought food and we ate in the car.”

USS Sylvania (Photograph in the Public domain, available via Wikipedia)