Back in June, I alluded to my upcoming vacation. I generally do not like to publish when I am going to be away from home after my in-laws suffered from identify fraud several years ago while they were away on vacation. I have been back for a little while and now I am ready to share.

The trip’s two main purposes were to see my Dad and to visit many of the places I lived in my youth. My children had never been to New York or New England. Overall I think the trip was a great success. The only negative memory was the car rental agency. We disembarked from the train in Boston only to be told that no cars were available. Luckily, the problem was quickly solved by taking a taxi to another location. 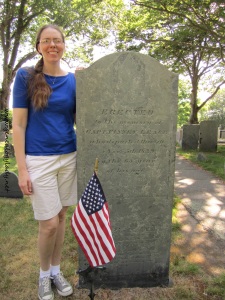 Me with my ancestor Capt. Finney Leach at Burial Hill, Plymouth.

The trip was not intended to be a genealogical journey. I had promised my children that we were not going to spend lots of time trudging through cemeteries. As it ended up, we spent one Sunday in two cemeteries, Old Burial Hill in Plymouth, Massachusetts, and Wendell Cemetery in Holbrook, Massachusetts. It was a somewhat miserable day to begin with due to the extremely high humidity. My children whom I love dearly do not like spiders or bugs. In New England, there were many new species of insects that they had previously not been introduced to. They accompanied me through Burial Hill but the bugs quickly became too much for my son to handle. In Holbrook, they just stayed in the car.  I was able to take new pictures of many of the stones I had photographed 15 years previously. Wendell Cemetery is where my great grandparents are buried. We took many annual trips there when I was a child to plant flowers on their graves for Memorial Day. As I have delved deeper into my family genealogy, I have discovered the many other generations of the family buried there including dozens of cousins. I specifically wanted to photograph the grave of one of my Revolutionary War ancestors who is buried there.

While visiting my Dad, I packed up seven boxes of family photographs and documents. He was the keeper of his parents’ vacation slides from many of their trips around the world in the 1960s-1970s. Now it is my task to view and scan them as well as decide which ones  should be preserved. Another treasure that my Dad had recently discovered was the Kentland Newton County Centennial book which was published in 1960. The book has pictures of many of the people mentioned in the letters as well as all sorts of information about Kentland. We will seeing some of these pictures soon in future blog posts.

To begin with I’m pretty sure I forgot to finish yesterday’s letter. I thought about it after it was sealed and sent out. Maybe I didn’t anyway if I did I hope you understand.

There is another ball game this P.M. but it was too hot to walk down and I can see it a little from our front porch. We watched the boxing bouts from the porch last night. It’s a little far but I don’t think much farther that one would be from the ringside in a big bout in the states, and we could hear the band pretty well here also. Didn’t have a movie last night – nor none tonite. Guess none tonite on account of church.

We had chicken again today but it isn’t nearly as good now as it was at first. It is probably just as good but after having it once each week and turkey in between time it isn’t such a novelty. Once in a while we draw a poor meal but for the most part we have been fed very good. In fact we get much more than we need.

[page 2] This seems to be a typical lazy Sunday afternoon but I don’t know why because every day is very much the same except church and chicken but it’s just something that makes one want to take a nap. I’ve already written to the folks and want to write C.J. yet before sleep over comes me.

I’ve told you about many of our Drs. leaving to other locations and I wouldn’t be a bit surprised to see others do likewise and I wouldn’t be a bit surprised if I wasn’t one of them. I’ll write you if I am – but won’t be able to tell you when or where. I think we I will know before long if I’m to be transferred. It seems as if the whole bunch will be broken up. Must have been a rotten bunch.

Again if you have the papers I’d like for you to pay the Federal Tax for last year. That we know will always have to be paid and I think will cause less trouble if taken care of now. I’m going to write on the back

I’m going to finish this and leave a little space in case things develop – because I don’t like to leave them unfinished. I can also add a line if mail comes which it didn’t this A.M.

P.S. I didn’t mean to be a softie at the end. It’s just the way it happens.

5 thoughts on “I still think of you folks lots (Roscoe)”