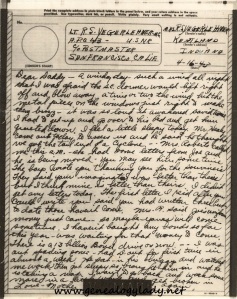 Dear Daddy – A windy day – such a wind all night that I was afraid the S. E. dormer would lift right off and blow away, a time or two the wind hit the metal pieces of the windows just right to make them buzz – it was so loud it awakened David twice. I had to get up and go over to his bed and get him quieted down. I feel a little sleepy today. Mr. Healy came out today to assess us and he said he thought we got the tail end of a cyclone – – Mrs. Roberts called me this a.m. – she had some letters from Joe and he is being moved – you may see him some time. The boys wrote you thanking you for the souvenirs. They said your imagination was better than theirs but I think mine is better than theirs. I didn’t get any letters today. The first letter I rec’d after you could write you said you had written three but to date those haven’t come. Mrs. R. said Joe’s uniform money just came – so maybe yours will come sometime. I haven’t bought any bonds so far this year – was waiting for that money to come. There is a 13 billion Bond drive on now – – I was out spading some – had D. out for first time in almost a week. He sat in his buggy and watched me work then got sleepy so brought him in and he is taking a nap. I want to go back and work some more in a little while and get broken in again. 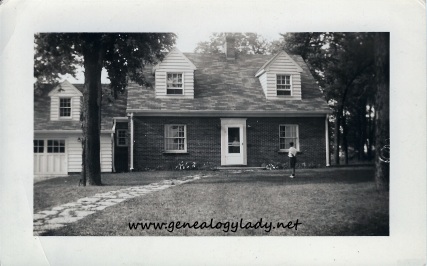 2 thoughts on “Tail End of a Cyclone (Gladys)”