Yours of Dec. 18 and 20 came today, one of them had the pictures of Jimmie Ed & David with their mothers, etc. I think I got the biggest shock of all from the one of D. standing alone on the sidewalk. Of course you had often written about him walking and standing, etc. but he looked so boyish and grown up in that picture. He was standing there just like a little old man.

There is a wide gap of about one week in your letters so I didn’t get to begin at the beginning. I don’t know what happened to Virginia Z. but you spoke of the possibility of her having a skull fracture, I suppose the details are in those missing letters.

The giving of Vit. C. tablets to D. is a good idea and might be better than forcing him to take the oranges. However, commercial tomato juice would also be OK or grape fruit juice or pineapple juice but I suppose those things require lots of points so I see no reason why Vit. C. tablets aren’t just as

You mentioned another thing. Ar The dividends on the insurance – you said the three policies. I don’t remember how you get three. I thought it was four. And there should be a small dividend on the one that was paid up. On each premium slip on the old policy there was always so much, less the dividend, plus the sum interest on the loan. Now that the loan is paid up we should be able to collect that dividend. I have a feeling you meant the $26⁰⁰ was on the four policies or possibly on all five. I’ll be glad to get a financial statement at the end of the year – you said you would send one if I wanted one. Not too detailed however. I hope the $300⁰⁰ check I sent helped out. Well the space is all gone so 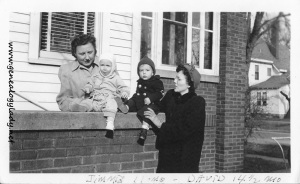