This is pretty late Sat. night. Mr. French and I got interested in Acey Ducey and then in a card game and we just almost didn’t stop. So it is almost Sunday morning. Joe has the duty so that is the reason he wasn’t here – We are planning on coming home next week end if at all possible that is if the powers that be are agreeable. 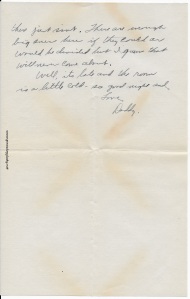 [page 2] there just isn’t. There are enough big ones here if they could or would be divided but I guess that will never come about.

Well, it’s late and the room is a little cold – so good night and
Love Daddy