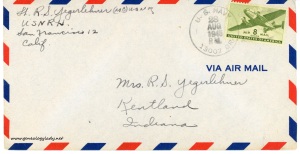 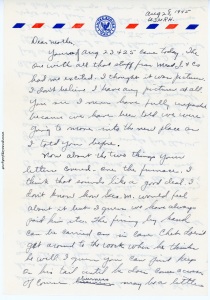 Yours of Aug. 23 & 25 came today. The one with all that stuff from Mead J. & co. had me excited. I thought it was pictures. I don’t believe I have any pictures at all. You see I never have fully unpacked because we have been told we were going to move into the new place as I told you before.

Now about the two things your letters covered – one the furnace. I think that sounds like a good deal. I don’t know how Geo. M. would feel about it but I guess we have always paid him, etc. The firing by hand can be carried on in case Chet doesn’t get around to work when he thinks he will. I guess you can just keep on his tail until he does come across. Of course burners may be a little 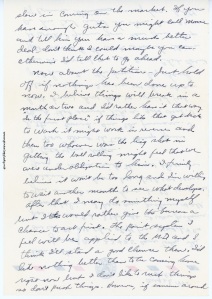 [page 2] slow in coming on the market. If you have enough guts you might call Monroe and tell him you have a much better deal – don’t think I could maybe you can – otherwise I’d tell Chet to go ahead.

Now about the petition – Just hold off if nothing has been done up to now. I believe things will break in a month or two and I’d rather have it that way. “In the first place” if things like that get back to Wash. it might work in reverse and then too whoever was the big shot in getting the ball rolling might feel that we were under obligation to him. I firmly believe it won’t be too long and I’m willing to wait another month to see what develops. After that I may do something myself but I would rather give the bureau a chance to act first. The point system I feel will be applied to the M.C. and I think I’ll stand a good chance then. I’d like nothing better than to be coming home right now but I don’t like to rush things so don’t push things. However, if someone around 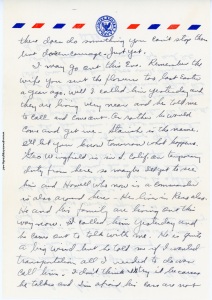 [page 3] there does do something you can’t stop them but don’t encourage – Just yet.

I may go out this eve. Remember the wife you sent the flowers too last Easter a year ago. Well I called him yesterday and they are living very near and he told me to call and come out. Or rather he would come and get me – Stanish is the name. I’ll let you know tomorrow what happens. Geo. Wingfield is in S. Calif. on temporary duty from here so maybe I’ll get to see him and Howell who now is a commander is also around here – He lives in Reno also. He and his family are living out this way now. I called him yesterday and he came out to talk with me. He is quite a big wind – but he told me if I wanted transportation all I needed to do was call him. I don’t think I’ll try it because he talks and I’m afraid his cars are not 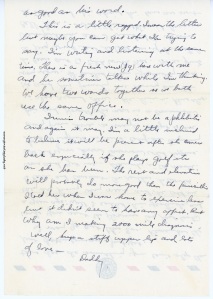 This is a little ragged. I mean the letter but maybe you can get what I’m trying to say. I’m writing and listening at the same time. There is a fresh new (jg) here with me and he sometimes talks while I’m thinking. We have two wards together so we both use the same office.

Irene’s trouble may not be a phlebitis and again it may. I’m a little inclined to believe it will be present after she comes back especially if she plays golf, etc., as she has been. The rest and elevation will probably do more good than the penicillin. I told her when I was home to exercise less but it didn’t seem to have any affect. But why am I making 2,000 mile diagnosis?

1 thought on “About Two Things (Roscoe)”