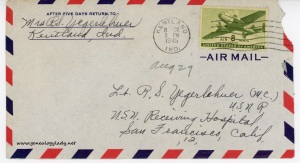 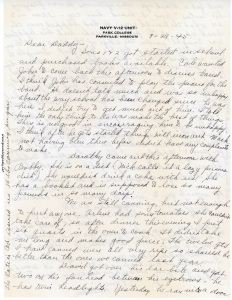 Sons 1 & 2 got started in school and purchased books available. Cole wanted John to come back this afternoon to discuss band. I think John has consented to play the piano for the band. He doesn’t talk much and was so unhappy about the way school has been changed since he was here I didn’t try to get much out of him. I told him the only thing to do was make the best of things. There is no good in encouraging him to be unhappy. I think after he gets started things will iron out. Mark not having been there before didn’t have any complaints to make.

Dorothy came out this afternoon with Bobby. She is on a diet (Nick calls it a lazy person’s diet). She wouldn’t drink a coke with us. She has a booklet and is supposed to lose so many pounds in so many days.

We are still canning, but not enough to hurt anyone. Arlene had some tomatoes she couldn’t take care of, so after dinner this evening I put six quarts in the oven to cook. It didn’t take me long and makes good juice. The twelve qts. I have canned were all very ripe so should be better than the ones we canned last year. [written on side] The Ration Bd. issued us 35 lbs. canning sugar.

David got over his ear bit and got two on his forehead between his eyebrows – he has twin headlights. Yesterday he ran into a door

[page 2] and got a black eye. This afternoon he was playing his “notas” and I heard him cry – I ran in to see what the trouble was – he had slipped over the back edge of the piano bench but his left foot was caught under the edge of the piano and he was practically hanging by his left foot. Tonight he was supposed to be in bed asleep when we heard him yell – John went up and he had fallen out of bed. I said he was probably riding the side of his bed.

It’s 11 PM and I should get to bed. No school tomorrow because of teacher’s institute but school Friday. David wanted to go to school with J. & M. this morning.

Thurs. a.m. We have 6 qts. of corn ready for the locker and that’s enough corn. Yours of Aug. 26 posted the 27th came this a.m. Also a letter from Mrs. Moneyhan asking for certificates of vaccination for Bud (Francis Jr.) & Madelyne – She wants separate certificates. She needs Madelyne’s by Sept. 6 – her address is Mrs. Madelyn Moynihan, 19 Mt. Vernon St., Somerville, Mass. She wants you to write to Mont – his address is Lt. Francis C. Moynihan U.S.N.R. Staff Air Pac – Sub Com Fwd ℅F.P.O. San F. Calif. Box 24. Madelyn says she misses Mo. and would love to be back there (OH Brother!!). Their new baby is a girl. [written on side] she says it was last Aug.

Well Daddy, I hope your new duty is soon over. From what we are hearing in the news, it won’t be long – Of course we are so anxious, any time will seem long.

1 thought on “One Injury After Another (Gladys)”