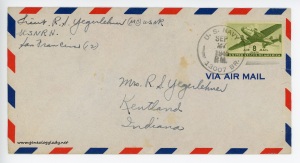 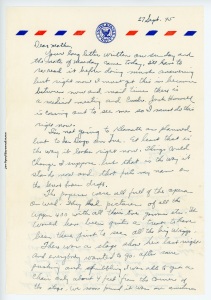 Your long letter written on Sunday and the note of Monday came today. I’ll have to re-read it before doing much answering but right now I must get this in because between now and mail time there is a medical meeting and Cmdr. Jack Howell is coming out to see me so I must do this right now.

The papers were all full of the opera on Wed. They had pictures of all the upper 400 with all their eve gowns, etc. It would have been quite a treat to have been there just to see all the big Wigs.

There was a stage show here last night and everybody wanted to go. After some pushing and squibbling I was able to get a chair only about 4 feet from the corner of the stage. We soon found it was an amateur 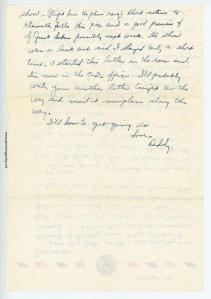 [page 2] show – (Right here the phone rang.) Short notice to Klamath Falls this p.m. and a good promise of Great Lakes possibly next week. The show was a leak out and I stayed only a short time. I started this letter in the room and I’m now in the O.D.’s office. I’ll probably write you another letter tonight on the way and mail it someplace along the way.

I’ll have to get going so
Love Daddy

1 thought on “Another Draft (Roscoe)”